Why Fighting is Important


Isn’t life a fight for all of us to one degree or another?

And we don’t win all of those fights and even the ones that we win often leave us marked up, sore and exhausted.  I box as a hobby and part of the reason I do it is because it is a metaphor for everything else I do in life.

I’ve fought for 34 years, first getting my black belt in Tae Kwon Do and then moving on to boxing. I’m glad I can defend myself and I think it is important for everyone to know how to throw a punch or kick if they have to.

But these aren’t the main reasons I fight. 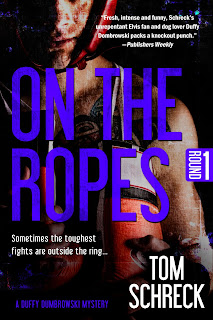 The more pain I can endure, the more I can get out of life. The more I can put off the immediate gratification addiction the more long-term hedonism I can enjoy. Getting hit, feeling it and dealing with it, let’s me know I am not a slave to always feeling good.

Doing what scares me over and over teaches me that I can deal with emotions I don’t like and move forward anyway.

My character, Duffy, lives by this.  He’s scared to fight but terrified of getting too old not to fight. In my-work-in-progress he’s sent in to crisis when it looks like boxing is going to be taken away from him. He knows it’s who he is not just what he does and when that’s taken from him he realizes he might not be any different than anyone else.

I judge pro boxing and last Friday I did the ESPN fights. In two of the bouts guys took beatings that no reasonable person would ever endure. When the fights were stopped by the referee both fighters complained. They wanted to keep going.

They were both bleeding from several facial lacerations and their eyes were swollen. I watched the replay of the fights and television homogenizes the brutality of the sport. Up close it’s real trauma, real blood and real hurt.

To do that willingly you have to be special. Some might even say insane.

But if you’ve done it you know that there is something intoxicating about it.

Facing what scares you and keeping on when you’re hurt is its own special high.

You don't have to fight to get this but for me it is the cleanest of the metaphors.

What do you do?