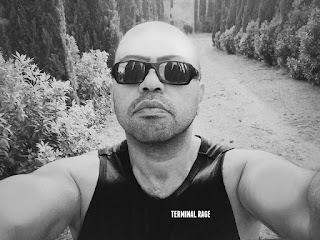 A.M. Khalifa is a critically acclaimed and bestselling author based in the eternal city of Rome. He writes up-market political thrillers and literary fiction with a focus on niche international stories that breach cultural taboos and provoke dialogue on sensitive issues. His debut novel, Terminal Rage, was described by Publishers Weekly as “dizzying, intricate, and entertaining,” while referring to its description of post-Mubarak Egypt as “among the best set pieces of the book, displaying a wry grasp of Egyptian mores and deft pacing.” Forewordmagazine gave it a glowing five stars, noting that “Khalifa manages to pull off something that is often difficult to do in the thriller genre—he keeps the novel unpredictable and lays out a plot so twisted that the puzzle picture morphs as more pieces are added.” Khalifa is currently writing the sequel to Terminal Rage, tentatively titled Terminal Deception.
In addition to his debut novel, Khalifa has published, Paper Cut Hearts a collection of  soul-rinsing stories of reinvention, redemption and retribution, which was Foreword Reviews’ 2014 INDIEFAB Book of the Year Award Finalist.
When he is not writing, Khalifa works for a boutique film and communication company specializing in cause-based story-telling, working among other things on serving the United Nations’ global efforts to eradicate chronic hunger. When his schedule permits, he also serves as an independent film expert, and has worked with Stephen Gaghan, Steven Soderbergh, George Clooney and Ridley Scott.


Khalifa’s writing adventure commenced in the early nineties in Cairo as the editor of an underground, bilingual magazine advocating for democracy and freedom of expression in the Middle East.  Having lived, worked or studied in over fifteen countries, Khalifa is fluent in four languages. He holds a Master’s of Science in Development Economics from the School of Oriental and African Studies in London.
Read all his posts on CFC here. Visit his website here. Follow him on Facebook. But most important of all, stay ahead of the curve and sign up to his newsletter here for free fiction, insider information, and dancing unicorns.