Judging a Book by the Cover

I was at the Baltimore Bouchercon sitting having beers with my buddy and mystery writer extraordinaire, Henry Perez.

"I read 'On The Ropes' and damn, Schreck, you can write," Henry said.

"Yeah that was some dark shit."

"Dark? People usually tell me it's funny," I said. I hadn't heard "dark" before.

I guess he had a point. Then he said something shocking.

"You gotta lose the dog on the cover, though. That's going to kill you."

"What? I love the hound." I thought everyone did.

"Yeah, he's great, Schreck, but you put a dog on the cover and everyone thinks you're a cozy writer. Let me tell you, you ain't a cozy writer." Henry took a self-congratulatory pull off his draft.

Fast forward six years and Thomas & Mercer releases the fourth in my series, "The Vegas Knockout." My editor told me when he signed me that we were losing the hound. I was bummed.

For a little while.

The book was released at the end of April.  On July 1 it was the number one rated hard-boiled mystery on Amazon.

The cover is a close up of a fighter getting punched in the face and spitting out his mouth guard.

Well, I got my rights back to my back list and in a joint effort with my literary agency, Irene Goodman, we're re-releasing the books with new gritty covers. In the first week "On the Ropes" with no advertising or buildup made it to the top 50 of the mystery sports genre six years after its original
release. 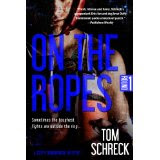 What do you think about covers? Which of my covers do you prefer and why? Even if you like the doggy one which one would you be more apt to buy?
Posted by Tom Schreck at 4:06 AM