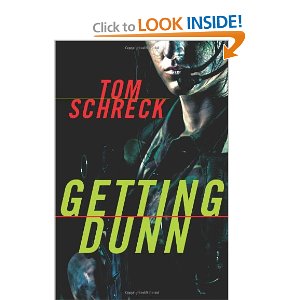 by Tom Schreck, author of Getting Dunn and The Vegas Knockout

Hey, thanks everyone for the warm welcome to the blog.

I write the Duffy Dombrowski Mysteries where the protagonist is a social worker during the day and a pro boxer the rest of the time. His crime fighting occurs whenever he feels like someone is taking advantage of the vulnerable people on his ghetto caseload. My latest Duffy, The Vegas Knockout, went to number one on Amazon’s hardboiled mystery bestseller list.

I also have a standalone thriller out called Getting Dunn. It’s about a rash of suicides in the military that turn out to not be suicides after all but a slew of murders to cover up something else going on. TJ Dunn is a female MP who is battling her own PTSD and dealing with the suicides of her fiancé and her father when she starts to look in to things. Getting Dunn broke in into the Amazon hard boiled top ten last summer.

I love to write crime fiction but I also love to read.

I thought a good way to start off my tenure here is to start a conversation about pet peeves in the genre. If you read a lot you know what I’m talking about. Here are some of the trite things that make me roll my eyes and shake my head whenever I encounter them in a novel.

1. The Incompetent Government Official—Don’t we just assume that anyone associated with the government is going to be incompetent, officious and corrupt? Wouldn’t it be more interesting in a novel if, say, an FBI agent was really good at what he or she did?

2. Religious People Are Always Evil—Sure, there are lots of hypocritical, evil fundamental religious people out there but aren’t there also a lot of really really good people who are into God-stuff too? Why not make a church-going character a hero or at least a positive force for a change?

3. Characters Getting Knocked Unconscious All the Time—I work in pro boxing and watch the people who can punch the best in the world and I get to watch them up close. In 15 years of doing that I’ve only seen someone get truly knocked unconscious for more than a second or two once. Yet in crime novels it happens all the time. On top of that, in fiction if you get knocked out all you need to do to get rid of all the symptoms is too squint and shake your head a few times.

Maybe with all the attention being paid to sport related concussions writers will pay more attention to the accuracy of their writing.

4. Instant, Automatic Sex—Doesn’t matter how much the participants have had to drink, how much they hate each other, the stress they’ve been under or their history with trauma, everyone if fiction can just drop their trousers and have at it like a couple of badgers in heat. Uh-huh, good luck trying that in real life.

Now there, I got this conversation started and I could go on and on but I’d rather hear from you. Tell me, what makes you nuts in crime fiction?
Posted by Tom Schreck at 6:00 AM