Punch Up Your Fight Scenes: Three Techniques To Knock Readers Out 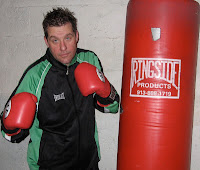 by Tom Schreck, author of the Duffy Dombrowski Mysteries

My job as a world championship boxing judge gives me a unique perspective on sizing up literary fight scenes. I’m one of three people who decide who wins and who loses in fights with multi-million dollar purses. The boxing game isn’t kind—one loss sends a boxer to Palookaville, while a win means gargantuan paydays, endorsements and global recognition.

So, I’m not exaggerating when I say I have to know how to evaluate a fight.

That skill has helped me in my own mystery series, which, not coincidentally, features a pro boxer, Duffy Dombrowski, who works a day job as a social worker. Duffy fights in and out of the ring but unlike a lot of protagonists with fighting skills he loses his scuff ups almost as often as he wins.

Because of my job in the boxing business I had to make sure that my scenes were true to what really happens in the ring, the gym and out on the street. In the same way that a ring loss can have a fighter living Brando’s life in On the Waterfront, a poorly written fight scene can knock your mystery out and have acquisition editors giving you the ten count.

Here’s how you can keep your wordsmithing guard up and get your fight scenes off the ropes.

Think Less
Experienced fighters of all types are effective because their actions are reflexive. Joe Louis once said, “If you have to think about it it’s too late.” And the Brown Bomber was absolutely right.

Keep sentences short and on the action in fight scenes. Describe punches and blocks with an economy of words and keep the pace fast. Real life fights happen in a blink of an eye and fighters work at a different level of consciousness. They block a punch or throw a hook in the same way every time because they’ve trained their body for years to do just that.

Avoid long paragraphs that describe the fighters’ thought process or their fight strategy. Keep the action in the instant and make your narrative move as fast as the fighters.

Keep It Simple
If your goal is to nail the gritty realism of a fight keep the techniques the combatants utilize simple. Ask any master martial artist, pro fighter or even the new breed of ultimate fighter about what techniques work and they will tell you that it’s the basic moves executed perfectly.

So even though a jumping spinning axe kick followed by a reverse tiger’s claw to the victim’s Mastoid Process may sound cool you’re not going to win any reality points by over doing it. Instead go for exactly what a good cornerman tells his fighter: stiff jabs followed by hard crosses and the occasional hook.

Like all good writing you should look to make your verbs do the talking, not over the top adverbs and adjectives. Think of all the verbs that you can use for “punch” and use them to describe the type of punches that are thrown.

An expert fighter’s jabs feel like getting stabbed with a screwdriver. A body shot gives you the sense that someone squeezed your organs from the inside and a dinger to the temple will cause a flash of hot orange light that gets to you before the radiating pain spreads across your head and down your neck.

Know What Really Happens
Nothing kills a fight scene’s realism like a battle that just goes on too long or has one of its participants getting too beat up. Unless you want your prose to read like Tuesday Night’s WWE Pro Wrestling, don’t have two by fours broken over heads or fighters with broken ribs chasing the bad guys down after a 100 yard dash—it just can’t happen.

There’s a feeling you get when you get punched in the face and it’s different if it lands right on the nose, on the forehead or on the side of the head. A shot in the jaw will hurt in the ear and a hard blow to the ear will cause a sharp pain to run through your head. A punch to the stomach is different if it lands square in the breadbox, over the liver or just north to the solar plexus. The world famous kick to the groin is less effective in real life than you think because it’s actually a small target (make your own jokes) and even if you hit your target it takes a few minutes for the brain to register the pain there.

A shot to the head can hurt you more in the neck and the shoulders than in the ‘ol noggin. I got knocked down by a pro one time and I went down so fast that the punch didn’t have time to hurt my neck. I got up and felt a little drunk and uneasy. It’s a weird thing to explain but in some ways it wasn’t entirely unpleasant. That’s an experience you can only get from getting hit—or talking in depth to someone who gets hit on a regular basis.

Now, at the sound of the bell, get out off your corner, keep your hands up, protect yourself at all times and come out writing.

Tom Schreck has officiated the world heavyweight championship twice and is regularly seen judging bouts on Pay-Per-View, HBO and Showtime. He writes the Duffy Dombrowski Mysteries that feature a low level pro boxer who solves crimes. His newest release THE VEGAS KNOCKOUT, will be available on May 15. Visit tomschreck.com and “like” his fan page on Facebook at http://www.facebook.com/DuffyDombrowski for a chance to win a Kindle Fire.