By Jenny Hilborne
Author of mysteries and psychological thrillers

How far would you go to get it? For many, the answer is not so black and white. Any time someone gets away with murder, or some other heinous crime, I'm sure we all wonder how far we might go to get the justice we seek. More than one high profile murder cases comes to mind where the perpetrators got away with it. Money, fame, whatever it was that got them off the hook...how do the families of the victims deal with their anger over the injustice? How do they ever move on when the criminal seems more protected by the legal system than the innocent victim? I can’t imagine.

We have prison overcrowding with federal prisons urged to grant early releases for inmates. How likely are they to reoffend? Who knows? Many released prisoners commit another crime. 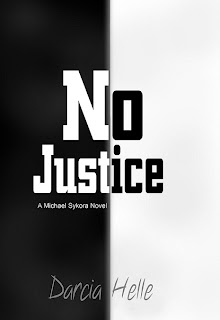 A while ago, I read NO JUSTICE by Darcia Helle. While this is a work of fiction, it asks the same question and provokes thought about how far a civilian might actually go for justice when denied it through the legal system. Darcia's book explores the difference between revenge and vengeance, and the affect an injustice might have on a person's character. Intrigued and impressed by her novel, I invited Darcia to discuss her book, and how injustice and revenge changed her main character, Michael Sykora. 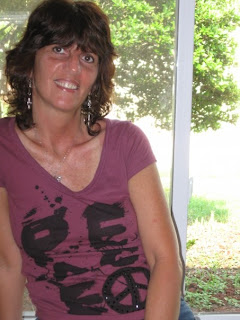 We’ve all heard of criminal cases where justice did not prevail. Stories range from the wealthy man getting away with murder to the rapist being let out early on “good behavior”, only to rape again. Most of us proclaim our outrage, then turn off the TV news or toss the newspaper aside and return to our lives. These cases are relegated to the back of our busy minds.

The same isn’t true for the people whose lives are touched by violent crime. They can’t turn off the TV and forget. They live with the horror each and every day. And they know they won’t always get justice.

How far would you go to right a wrong?

Michael Sykora, the main character in my novels No Justice, Beyond Salvation, and the upcoming Killing Instinct, asks himself that question when his fiancé is brutally raped and murdered. He wants justice, and he doesn’t trust the system to work. He also wants revenge.

The need for revenge sets Michael on a lifetime path of vengeance. While the words revenge and vengeance are often used interchangeably, there is a subtle but marked difference. Revenge is a deeply personal act of retaliation through physical and/or psychological trauma or murder. Revenge is less about justice and much more about getting even, inflicting pain, and lashing out against the person or people you were hurt by.

Vengeance is an act of retribution in which a person is attempting to achieve his/her idea of justice. The goal here is not so much to lessen your own pain by hurting the other person, but to achieve some sort of balance in a flawed world.

One act of violence by a career criminal shatters Michael’s world in a way he can’t reassemble. He can no longer be that quiet, law-abiding guy who sees good in the world. Now he sees injustice all around him, and he makes it his mission to try to balance the scales. He gives victims and their families peace in the only way he knows how; he eliminates the threat from their lives. He ensures no one else will suffer at the hands of that murderer or rapist or pedophile. The act of killing gives him no pleasure, but does give him a vague sense of peace.

Maybe you don’t agree with his methods. Maybe you think our flawed criminal justice system remains our best option. Or maybe, like me, you stand somewhere in the middle. The truth is, until our own lives have been touched by this kind of violence, we can’t honestly say how we’d react. Hopefully, none of us will ever have to answer the question that derailed and now defines Michael Sykora’s life.

Darcia Helle lives in a fictional world with a husband who is sometimes real. Their house is ruled by spoiled dogs and cats and the occasional dust bunny.

Suspense, random blood splatter and mismatched socks consume Darcia’s days. She writes because the characters trespassing through her mind leave her no alternative. Only then are the voices free to haunt someone else’s mind.


http://www.Facebook.com/darcia.helle
The characters await you.
Posted by Jenny at 2:00 AM