(Or, Yet Another Left Coast Crime Report)

When I first heard that Left Coast Crime 2013 would be in Colorado (in March!) I decided I wasn't going to go.

Never mind that it would be at the lovely Cheyenne Mountain Resort.  Having grown up in Canada, I've had enough winter to last me a lifetime.  That's why I live in Southern California, and never visit my family at Christmas.

But the members of Crime Fiction Collective had the opportunity to do a panel together, which was a real draw.  And, I reasoned with myself, I wouldn't have to leave the hotel if the weather was inclement.

In the month or so before the convention, I checked the weather forecasts obsessively.  The week before, it was sunny and 60ish.  When I left for the airport on Wednesday afternoon, the forecast was positive.  But by Thursday morning, I was hearing muttering about predicted snow, and The Weather Channel confirmed the rumours.  And yes, I had to go outdoors to get from my room to the conference area.

Here's the view from my window on Saturday morning: 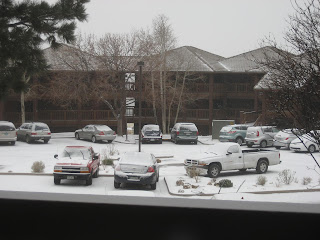 But I had a marvelous time.  Our panel went very well.  As the moderator, I had the easiest job.  (If you're interested, you can purchase a recording here.) 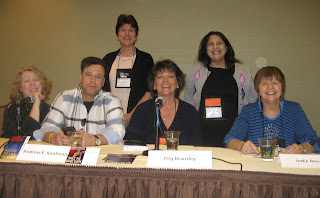 Some of the wonderful panels I attended were Gritty Details: The Forensics of Crime Writing, (with Robin Burcell, J.T. Ellison, and CFC's own  L.J. Sellers, moderated by Jan Burke) 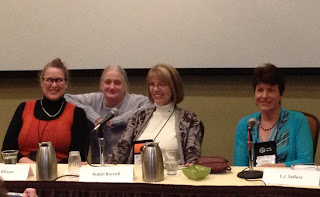 and The Woman With a Gun (guest of honor Laura Lippman interviewed by Twist Phelan). 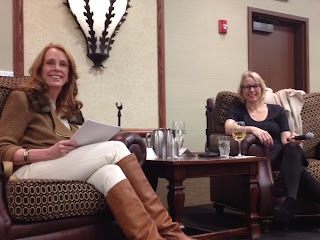 Awards were presented at the banquet on Saturday night.  The winners were: