A Touch of Fun...with Gary Ponzo

We welcome back to the blog Gary Ponzo, bestselling indie author with a great sense of humor.

The first book in your series, A Touch of Deceit, is consistently in the top 30 on Amazon's police procedural list. How do you keep that going?

I'd like to say it's a really good book and that it resonates with readers, but you know as well as I do some of it is luck with a twist of the Amazon algorithm working its magic. I did spend a good five years writing and rewriting the thing until it passed the beta reader test. Then, I blew up the first 150 pages once I was told the story started a little too slow—a mistake I learned very early and would never make again. Also I wouldn't eliminate the fact that it's a series and every time I release a new book, the first book in the series gets a little bump in sales.

Your books are highly rated and sell well on Kindle. Have you queried Amazon or other publishers? Or do you prefer to stay indie?

Thanks for the kind words. My readers have been enthusiastically supportive and I'm so grateful to them. Have I been queried by Amazon or any other publishers? No. Do I prefer to stay indie? I don't know. I'm approaching over 100,000 Nick Bracco books sold in the past couple of years and the future gets brighter with every release, so I don't know what's on the other side of the publishing world, but I'm sure liking the view on my side of the yard. Does that make me sound like a hick? I'm from Brooklyn for crying out loud. I didn't see a cow until I was thirteen.

What's your biggest challenge in being an indie author?

I should say the biggest challenge is exposure, but really my biggest challenge is finding time to write. I currently have a day job, a beautiful wife and two wonderful kids who are involved with all types of sporting activities, so I really have to work at squeezing in writing. I do most of it at night when everyone is asleep. When I get to the point where I can write fulltime, I'll find other things to distract me I'm sure.

While filming a documentary, the president's brother is captured deep within the Amazon Rainforest by a Colombian cartel. The president calls the one person who has the underground criminal contacts needed to fight this type of vicious enemy: FBI agent, Nick Bracco. Once again Nick relies on his mafia-linked cousin Tommy to help with the operation. When Tommy recruits an assassin to join the rescue team, the rollercoaster comes off the track and everyone becomes a target. 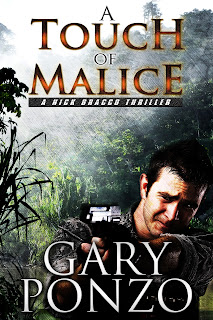 (I spent ten minutes trying to come up with a clever way to tell you about the story, but finally I just copied and pasted the blurb I used on my Amazon book page. I'm still scratching my head to come up with something better.)

What's next for you? Will you continue the series and/or do you plan to write any standalones? Is this a tough decision for an indie author?

I've been writing this standalone psychological thriller for the past five years. Here's the sequence of events which preclude me from finishing this book:

A: I release a new Bracco book and pickup the psychological thriller where I left off.

B: I get emails from people who loved the new book and want to know when the next Bracco book is coming out.

C: I put down the psychological thriller and begin a new Bracco book.

This is actually happening as we speak. The first thing I need is a title, though. Since all the others start with "A Touch of . . ." I need to find a new word for the title. A Touch of Despair? Contempt? Treason? Toffee? Help, I'm running out of words.

What do you see happening in publishing in the next few years?

I see a barrage of indie writers flooding the market. I see some really good ones who were overlooked by the publishing industry making a name for themselves. I see others struggle. Some because of poor manuscripts and others simply due to unfortunate events. I see the Big 6 publishers in NY becoming the Big 3 or maybe the Big 2. I see them passing up on some very talented writers in order to publish a book by Snooki's illiterate housecleaner who tells all about Snooki's bedroom activities. I see this book becoming a NY Times bestseller. I see very talented writers pulling their hair out.

Hey that's it! A Touch of Baldness! Nick Bracco infiltrates the publishing world in order to save the country from reading poorly written books by pseudo-reality stars which causes writers to pull out their hair. Okay, sorry you had to see that. I do it ten times a day without an audience.

Readers, writers: What do you think? Will the Big 6 become the Big 2? Should Gary look for a big publishing deal so he can quit his job? Would you read A Touch of Baldness?
Posted by L.J. Sellers at 6:00 AM