A Mystery of a Different Sort

This novel is not marketed as a mystery story, but rather as


an ingenious and unabashedly entertaining novel about a family coming to terms with who they are.  It is also a riotous satire of privilege and an unsentimental but powerful story of a daughter's unflinching love for her imperfect mother. (From the book jacket.)


The "Bernadette" of the title is a Seattle housewife whose husband, Elgin, works at Microsoft and whose teen-aged daughter Bee goes to a private school.   Bernadette and Elgin, both very intelligent with strong personalities, have a mostly good relationship. Bee, also very smart and self-assured, adores her mother, and thinks of her as her best friend. 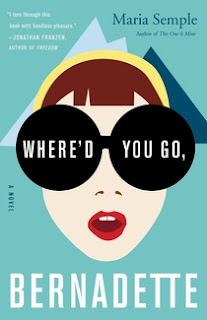 Bernadette hates Seattle, in fact she's certain she's allergic to it. The other parents at the Galer Street school, which Bee attends, think Bernadette is not only a snob but a horrible mother, mostly because the only way she helps out is by donating money rather than doing any physical volunteer work.

Bernadette and Elgin have promised their daughter  a trip to wherever she wishes as a reward for getting perfect grades throughout middle school, and Bee chooses Antarctica.   Bernadette decides that she can't handle complicated details of planning this trip on her own, so she hires a "virtual assistant" from a company in India.  She leaves everything in the hands of their representative, Manjula Kapoor, giving her carte blanche to make reservations and order supplies for the trip.

I HAVE ATTEMPTED NOT TO GIVE AWAY ANY DETAILS THAT ARE NOT ALREADY ON THE BOOK JACKET OR OTHER PROMOTIONAL MATERIALS.
IF YOU ARE CONCERNED ABOUT SPOILERS, PLEASE READ NO FURTHER.

During the weeks leading up to the trip, which is scheduled for Christmas vacation, the family's next door neighbor, whose son also attends Galer Street, decides to have a fund-raising event at her home, and, determined that Bernadette must assist, begins to harass her.

At the same time, Elgin has a major project due at work, and throws himself into it completely.  Between seeing little of her husband, and being hounded by her crazy neighbor,  Bernadette becomes overwhelmed by the stress, and just before the planned trip to Antarctica, she disappears.

Of course, herein lies the mystery.  What happened to Bee's mother?  How could Elgin's wife have vanished without a trace?   The efforts of Bernadette's family to find her are amazing, and heartwarming.  This book is, as the cover blurb proclaimed, ingenious, no matter how it's classified.

FTC Full Disclosure:  I borrowed the hardcover edition of this book from my local library.