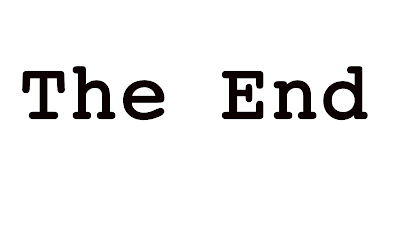 I’ve been thinking a lot about endings lately. No, not my own. The ones in my books. The reason for this moment of reflection is that I’m wrapping up my third novel.


As I’ve mentioned here before, I’m beginning to gain a better grasp on my process as an author. I’ve done it enough now, that I kind of know of what to expect as I stumble my way through. That’s not to say it’s always easier—it’s not. In fact, in some ways, it’s actually harder. I’m more the daredevil author these days, more willing to strap on my helmet and try things I would never have considered before, and with that comes its share of problems.

But the one thing I still pay very close attention to are my endings. They're important to me—really important—both as a reader and a writer.

As a reader, nothing bothers me more than a book that keeps me in suspense and turning the pages only to reach a conclusion that feels tacked-on or falls flat on its face. It doesn’t matter how engaging or well written the story is up to that point. If it doesn’t satisfy, I feel cheated. In fact, in those cases, that makes it even worse because my expectations are higher and the disappointment, greater. Reading is an investment, one that requires a payoff, not just in money but in time. Especially time. Since I've started writing books, I find I have far less of it to read. What little time I do have I want to feel worthwhile and enjoyable.

As an author, I know I won’t satisfy everyone, but I want to leave as few feeling disappointed or cheated as possible. So while I’m writing, I try to pay special attention to my reader’s mind as well as my writer’s. Part of that means making sure I’ve laid the groundwork and weaved my story in a manner that makes the ending feel organic rather than out of the blue or as my editor often cautions, “just in time.” I also try to pay close attention to both the story and the emotional plots. Two very different things but ones that are equally important. Since my stories are character driven, I want my readers to feel the emotional impact on my protagonist, and I want it to hit them hard. If my main character is feeling deep sadness, I want tears. If he’s feeling joy, I want the reader to experience that as well. When he’s in danger, I want them to know they have a pulse and to really feel it.

Recently, a writer-friend expressed her annoyance when she got to the end of a book and discovered there really was no ending at all. Lots of loose ends and no mention of a sequel. Bad move. She decided not to buy that author’s books anymore.

Another told me he bought a second book from an author after falling in love with the first, but when he did, it was a big disappointment. The reason? The ending was a big letdown.

These examples illustrate rather well how important an ending is in a book and how it can make or break an author's career.

So as I wind up to the ending of my own novel, I’d love to get your input. Readers: what bothers you most about endings, I mean, what drives you absolutely crazy? Writers: what do you do to make sure your endings measure up?
Posted by ANDREW E. KAUFMAN at 3:00 AM