On Theft and Entitlement

I’ve had Google alerts set up for my books and my name for years. I like keeping up on where and how my work and I are being mentioned over the Internet. It goes with the job.

But for several years now, I’ve noticed a growing and disturbing trend. The majority of my alerts now come as advertisements for “torrent” feeds offering up my books as free downloads. Generous of them to do so, but unfortunately, it's being done without my permission. 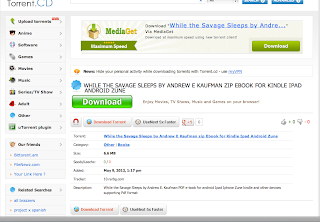 I get these advisories several times a day now, and they always seem to come from different websites. Insidious little bastards, they are, and I can only assume that since the volume of books I sell through approved channels has grown substantially over time, so too have the unapproved ones. There is always a price to pay for success, and this, I suppose, is one of them.

I can also assume that all this means there is probably a very large number of people who are reading my work free of charge. How many? There’s no telling, but according to what I’ve read recently, the numbers could be staggering. 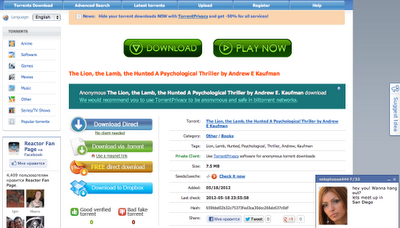 Torrents work by dividing large amounts of data into smaller chunks. Through this process, files like movies and e-books can be disseminated very rapidly and very widely, spanning well beyond the U.S. and into other countries.

Of course, torrents themselves aren’t illegal. What’s illegal is when they’re used to pirate copyrighted materials, and more often than not, that seems to be the case. 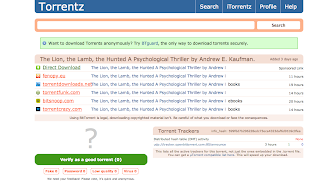 Unfortunately, stopping this kind of activity is about as easy as nailing jello to a tree. Many of the sites operate from overseas sites where copyright laws don’t apply. The U.S., in an effort to circumvent this, has started prosecuting people who download copyrighted materials via torrents. Unfortunately, because of the large number of people doing it, the process is cost prohibitive at best. Some companies have also  taken measures by “poisoning” torrents containing their material. Some have even filed cease and desist orders to Internet service providers of torrent users. But again, we’re taking about what amounts to a drop in the bucket when you take into consideration the size and scope of the problem. 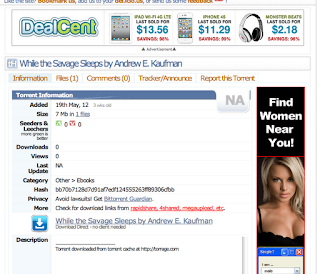 Does it bother me that possibly hundreds of thousands of people could be enjoying my hard work without paying? It certainly does. Do I let myself get worked up over it? Not really. I mean, let's face it, pirating is nothing new—it’s been around for ages—and the art of thievery is one that’s even older. Of course, with the advent of the Internet, these efforts become amplified to the nth degree, which does make it more troublesome.

And while I hate to take the “There's Nothing I Can do to Stop it” attitude, I know that there's in fact really nothing I can do—except maybe complain, get all upset, and stomp my foot. But then I just end up with a sore throat and foot, and the behavior that caused it continues on anyway.

But here’s the thing. I'm not worried about the money. Honestly, I'm not. If I were, I wouldn't have given away more than a hundred-thousand copies of my books this past year. What bothers me is when people steal because they feel they're entitled to do so. Kind of like when someone sees your fancy new car in the parking lot at a shopping mall and thinks it's perfectly okay to drive away with it just because they want to. When people steal because feel they deserve what I've worked so hard to get--that's when I start to get miffed. And what about all the wonderful readers who actually spend their hard-earned money on my books? Is if fair to them? Nope.

What do you think? Authors, does it bother you to know people are stealing your work? And readers, how do you feel knowing there are folks out there who are taking what you had to pay for?