I’m thrilled to introduce our guest blogger today, Jim Stevens, a fellow author who writes humorous mysteries. I have a lot of respect for anyone who can write “funny stuff” and his are truly funny. It is difficult to read an excerpt from any page in one of his books and not smile, and in many places I laughed out loud.

In addition to his Richard Sherlock Whodunit Series, he wrote a book called Whupped (no mystery here), which is my personal favorite. The language is a little rough in that one, so if you have tender ears, stick to his mysteries.

Jim Stevens was born in the East, grew up in the West, schooled in the Northwest, and spent twenty-three winters in the Midwest. He has been an advertising copywriter, playwright, filmmaker, stand-up comedian, and television producer. 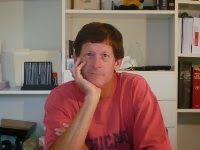 It’s downright criminal; there are so many crimes for readers to choose from.

Yesterday, I was trying to come up with excuses to avoid working on my latest Richard Sherlock Whodunit. I do this quite often when I’m stuck, can’t find the right word, or it’s really nice outside and I’m sitting at this computer without an original thought in my head. I Googled away, and guess what I find: TOO MANY DARN DETECTIVE BOOKS OUT THERE. Do you realize there are kid, adult, teenage, tweener, and senior citizen detectives? There are housewives, divorced wives, divorced husbands, shrinks, psychologists, marriage counselors, medical examiners, nosy neighbors, dog sitters, and even writers (who write about other writers solving crimes) figuring out whodidit, howtheydidit, and whytheydidit. There are blind detectives, detectives missing limbs, detectives with diseases, deaf detectives, there’s even a series about an overweight female detective who tries new diets while solving murder cases. What’s next, a detective who figures it all out even though he’s in a coma?

I think someone should impose a moratorium on the writing and creation of all new detective characters. Why? Because we don’t need any more, there’s plenty out there already. Any more will just muck up the muck even further and make it harder and harder to find the good ones, like the ones I’ve written.

We know Jim is joking, but he he is certainly correct about all the different sleuths we encounter in mysteries. What is the most unusual mystery series character that you have ever read? Or have written? Or have thought about writing?

Posted by Teresa Burrell, Author, Attorney, Advocate at 3:00 AM