The Trigger: Cover and Title... Finally!

As only a writer could do, I spent the week obsessing about the word the. I’ve had a title for my new thriller for months—The Trigger. But I started considering those powerful one-word thriller titles: Stolen, Missing, Inferno, Bombshell, Shiver, Dust (seriously, a new Patricia Cornwall), and I thought maybe I should title it just Trigger. 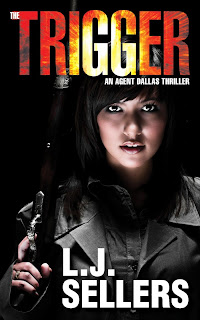 We developed a cover, and the single-word title looked great. I asked people in my house what they thought, and everyone said, “Yeah, I like Trigger better.” But it bothered me. Whenever I would talk about the story, I would stumble over the title. It started to sound funny.

Then my editor questioned the new title and said it made her think of a name, like the horse. So I knew it wasn’t right. Especially for people who might only see the title in text  (sans cover) and be confused by it.

So I’m back to The Trigger, which works well with the story, which goes like this:


Agent Jamie Dallas loves undercover assignments that get her out of the Phoenix Bureau. But when a woman and her baby disappear from an isolated community of preppers in Northern California, she knows the risk of infiltrating the armed group is dangerously high.

Once inside the compound, she discovers that the brothers who founded Destiny are scheming something far more devious than kidnapping or murder. Meanwhile, her local FBI contact, Agent McCullen, is pulled from her team and assigned to investigate the murder of a woman with phony ID, found at the bottom of a motel pool.

Soon Dallas finds herself in deeper trouble than she's ever encountered—with no way to reach her contacts. Can she break free of the bunker and stop their bizarre end-of-world plans? Will Agent McCullen identify the killer in time to help?

The Trigger is a gripping story that highlights our greatest fear—how a hacker and a fanatic with grandiose ideas can threaten civilization as we know it.


The book is scheduled for release January 1, and I have a great contest planned with a huge prize—a trip to Left Coast Crime. More details can be found on my website.

If you’re interested in an early copy of The Trigger (ebook and some print) and are willing to be on my street team to help launch it, please email me. ARCs will be ready in about a month.

So what do you think of the title? The cover? Story concept?