Although I wrote fiction as a kid, my real writing career started in non-fiction. After producing a bunch of technical monographs about handwriting and personality, I experienced the thrill of publication with The Complete Idiot’s Guide to Handwriting Analysis in 1999, followed by Handwriting of the Famous & Infamous a year later. But mystery was always my first love and I started writing Poison Pen, book one of my forensic handwriting series. I rapidly learned that writing fiction was (forgive me) a whole different story. With non-fiction, there was no setting, plot, characterization, POV, or scenes as there was in fiction. I just had to be mildly amusing and accurate in what I wrote. 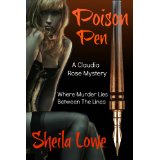 I had to re-educate myself and learn how to write all that other stuff and make it work. I learned it well enough for Penguin/NAL to publish my forensic handwriting mystery series, which was tres cool. But now I’ve taken the plunge into self-publishing through Kindle, and I’ve followed fellow blogger Peg’s advice to go all the way. I’m turning my recently released book, WHAT SHE SAW, into an audiobook. Which means a whole new education. Damn. I’m a lot older than I was in 1999 (and I was pretty old then), and I’m less thrilled about having to learn a whole new area of publishing. But the fact is, I really want to do this and it turns out that ACX/Audible makes it pretty easy.

Although an author can produce their own audiobook, there are numerous professional readers.studios to choose from. I listened to several posted auditions on ACX, then I posted Chapter One, asking for auditions specific to my book. Responses came the next day. The first was from a sweet young lady who had a very....youthful...voice. My protagonist is young, but not that young. Another response came from a reader who said that if there was profanity in the book, she would need to substitute “other words.” Sexual content was out, too. Seriously, if you have a big brute beating up on a woman, he’s probably not going to say, “Listen up, young lady...” So that didn’t work either.


Then I opened Door Number Three and my fingers and toes are crossed that this one is going to work. In fact, the studio head has already read the book and loved it. She’s made a list of all the characters and the various accents, and has requested more info. If we don’t make a deal, she will have spent a lot of time on my project, with much more to come. I’ve learned that a book of 95,000 words means a 10 hour audiobook, which takes a studio about 100 hours to process! 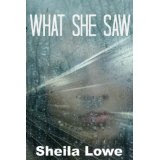 If I had known sooner that ACX can help match up authors and readers with no up-front money, I would have turned Poison Pen into an audiobook long ago. But that’s one of the important lessons learned from this investigation. Many excellent readers are willing to do a 50/50 royalty split, rather than taking an hourly fee. That’s a risk to them, and naturally, they want some assurance that the book will sell more than ten copies (okay, I’m exaggerating. 2000 copies). I figure that with the reader base I have, plus my Facebook friends, etc., etc., etc., at least the reader/studio can be assured that I will market my little heart out. If the audiobook doesn’t sell well, it won’t be because I didn’t do my best.

It’s a fascinating voyage; one I hope will lead to good things. Next stop, Create Space and print copies of WHAT SHE SAW. If you would like to hear the reader’s audition of Chapter One, email me: sheila@sheilalowe.com
Posted by Sheila Lowe at 12:00 AM