Sometimes Field Research is Actually in the Field

For the last twelve years my sisters and I have been taking an annual trip together—our “Sista Trip” we call it. It’s not easy coordinating four calendars (there used to be five of us, but Sissy left us eight years ago for the big trip in the sky). We have managed every year to go somewhere. The first “Sista Trip” was just a weekend together in San Diego, but since then we have managed to take longer trips and to much more exotic places, like Colorado, Montana, Nashville, Las Vegas…okay, it’s not exactly Paris or Rome, but we did make it to Hawaii once. We’ve even done a few road trips. I think those are my favorite.


This summer we went to Montana to see our two brothers and a gazillion nieces and nephews. We flew our brother who lives in Hemet to Montana too, so all the remaining siblings were together. It was fabulous.


Although I didn’t do any writing on this trip I did manage to do some research. That’s one of the great things about our jobs, no matter where you go you can observe people, build ideas for characters, soak up different cultures, all which help when you sit down to write.


But this trip went beyond that. I received some real hands on experience. I mentioned to my nephews that I would like to shoot a gun one day so that when I have my character do it in a future book, I’ll know how to better describe it. The next thing I knew, they set up a shoot for me. These are all Montana boys so guns are part of their dress code and any excuse to go shooting will do, even if it means dragging your old aunt with you. 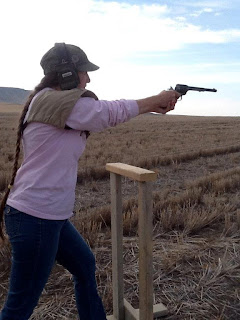 We drove to an area they often go to for target practice, lots of fields and small hills. There’s nothing around for miles. We set up the targets and then drove 500 yards away and set up the gun racks. You could hardly see the targets they were so far away. They also set up a target 100 feet away for the pistol practice. That was my favorite part. I shot three different pistols, an SR40C 40 caliber, a .44- caliber Colt, and a .22-caliber Colt. The first two had a lot of kick, but I managed to hit the target even though I could barely hold the gun steady. They were heavy. The Colts looked like something out of an old Western movie. The .22 was much lighter than the first two revolvers and it didn’t knock me back when I shot it, which made it a lot easier to hit what I was aiming at.


I also shot the rifles and hit the target at 500 yards, which is more a testament to my nephews’ equipment and instruction than my ability. They were so patient and incredibly informative. It turned out to be the highlight of my trip. And there is nothing like hands on experience to move my writing along.


As a writer, do you do a lot of field research?


As a reader, do you think you can tell when the author has actually experienced what they write about?
Teresa Burrell
Author of The Advocate Series
Posted by Teresa Burrell, Author, Attorney, Advocate at 5:00 AM