Jaya Jones returns home late one night after a gig playing tabla at an Indian restaurant one night, and discovers that she has received a package from a former boyfriend, Rupert Chadwick.  Their relationship had ended more than a year earlier when Jaya left London after finishing the research for her doctorate in history.

The package contains a ruby bracelet and a note asking her to take care of the artifact, and that all would be explained if she called him.  But a day earlier, Jaya had read of Rupert's death in a car accident, which must have occurred shortly after he shipped the package to her.

Stunned, but curious about the piece, which appears to be authentic and valuable.  Armed with a photo of the bracelet, she goes to visit an old family friend who happens to be a professor of South Asian art history.  He refers her to one of his graduate students, Lane Peters who is, he says an expert on Indian jewelry.

While Lane is researching the bracelet, Jaya makes arrangements to go to Scotland, where Rupert had been working on an archaeological dig, and where, presumably, he found the bracelet.  After an eventful couple of days, she heads to the airport, where she finds that Lane is on the same flight as she is.  Jaya is not pleased; she's not sure if she can trust him or not, but she finally agrees to work cooperatively.

This an academic mystery that's informative but not pedantic, with just a bit of romance thrown in.  Jaya is a strong, intelligent protagonist, and I look forward to seeing more of her. 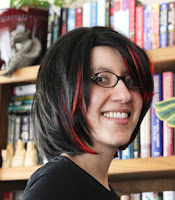 Gigi Pandian is the child of cultural anthropologists from New Mexico and the southern tip of India. After being dragged around the world during her childhood, she tried to escape her fate when she left a PhD program for art school. But adventurous academic characters wouldn’t stay out of her head. Thus was born the Jaya Jones Treasure Hunt Mystery Series. The first book in the series, Artifact, was awarded a Malice Domestic Grant. The second book in the series,  Pirate Vishnu, will be released in February 2014.
Readers who sign up for Gigi's newsletter at www.gigipandian.com will receive  an exclusive Halloween-themed Jaya Jones short story in October.


FTC Full Disclosure:  I purchased the self-published edition of this novel at Left Coast Crime 2013.

*Artifact was originally self-published in 2012, but is being re-released by Henery Press tomorrow.)
Posted by Unknown at 3:00 AM