The best present ever!


I don't remember where I first heard about Little Free Libraries, but it was some time ago, and as  soon as I discovered them, I knew I wanted one.

Then, a few months ago, when my husband asked what I wanted for my birthday, my answer was "a Little Free Library".  He checked out the website, and said he wouldn't have enough time to build one in time.  I told him it didn't have to be ready for my early-August birthday, but if that was a concern, pre-built ones were available.

When I got home from work the day before my birthday, there was a huge box in the living room, addressed to my husband.  My step-son, who lives with us, didn't know what was in the box, and was curious, in his restrained way.  I  did know, because of the return address label, and after dinner, I asked if we could open it, since we probably wouldn't have time in the morning.

Here's a photo taken after we unpacked it and all the detritus was cleared away.  (Yes, that's half a cat sticking out from behind it.)


On Saturday, Tod spent the day building a stand and mounting the library in our front yard.
And here it is, all ready to go. 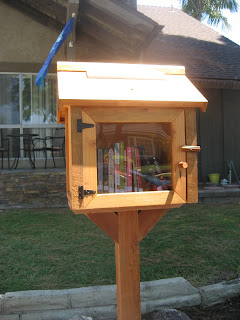 We've had a few people stop and ask about it, but I was becoming concerned that there was no apparent use.  But a little while ago (it's now been up a week) when I checked, I saw some empty spots and a book that I'd never seen before.

If you're interested, you can find more information here.