A few months ago I was signing at Bank of Books, an indy bookstore that opened in Malibu last fall. I was delighted to be invited to give a talk, but it’s been more than two years since my last Forensic Handwriting mystery was released, so I didn’t expect a huge turnout, and I must admit, my expectations were met. But I appreciate the people who showed up, and we were having a good old chat when a couple came in and sat down.

After a few minutes, the man asked me, “Have you ever considered turning your series into a TV show or movie?” I had to smile. What author hasn’t envisioned their character as the next Magnum P.I., Jim Rockford, (or Jessica Fletcher if you write cozies)? I’ve always envisioned Minnie Driver as my protagonist, Claudia Rose, and as long as I'm dreaming, John Cusack would work well for Detective Jovanic. I told the man that a film rights agent had indeed gone out with my series, which is psychological suspense featuring a forensic handwriting expert, but by the time I parted ways with the agency, she hadn't sold it.

The man handed me his business card and said, “I’m a producer, and I’ve been reading about you. I think your series would be great for TV or movie.”

Naturally, I rushed home and asked Uncle Google about him. I found that, not only is Tony Eldridge a producer on Denzel Washington’s next picture, The Equalizer (yep, based on the old TV show), but his company, Lonetree Entertainment, sold a series by Heather Graham for TV development. Looked like I would be in pretty good company.

We made a phone appointment for a Monday, but when I called, my call went to voicemail. I figured, “Oh well, that’s Hollywood—love ‘em and leave ‘em.” But wait...that was the day of the Boston bombings, and it turned out that Tony’s son had run the marathon, and he and his wife Tori were waiting to hear whether he was okay. Later they learned their son had finished the race an hour before the bombings and was at a café a short distance away when the blasts occurred.

Our phone call happened eventually, and a few minor tweaks later, I signed the option agreement. Now comes the hard part; the wait and see part; the pins and needles will it happen or won’t it part. Having several friends who have optioned books without seeing the hoped-for results, I’m not jumping up and down yet. But I am totally jazzed that a producer with real connections sought me out and after reading my books, was excited about promoting them to studios. Maybe if we all collectively (that’s Crime Fiction Collectively, of course) cross our fingers and toes, he’ll make the deal of the century and I’ll be able to say, “Coming to your screen soon, Claudia Rose and friends—stay tuned!”

For anyone signing a book contract, whether it’s with a literary agent or a film producer, I’ll leave you with an important piece of advice from a talk I attended at my local Mystery Writers of America chapter. Literary attorney Jonathon Kirsch’s warning, ‘don’t sell your characters,’ was worth several times my dues. Read those contracts carefully. You may find that rather than simply licensing the use of your characters, you’re given up the rights to them, which could potentially have a big impact on your future career and earnings. 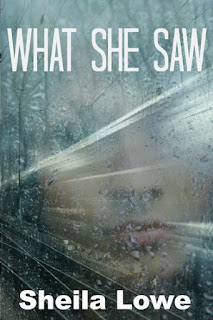 Meanwhile, I’ve written a standalone about a young woman with amnesia, in which my series characters, Claudia Rose, Detective Joel Jovanic, and psychologist Dr. Zebediah Gold, play important an role. What She Saw is about to be released to Kindle....any minute now. Stay tuned.

Oh, one more thing--I'm truly honored to be invited to join CFC. Looking forward to sharing with all of you.
Posted by Sheila Lowe at 1:00 AM