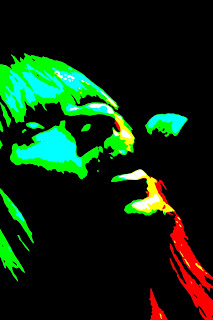 From The Black Box by Michael Connelly:

Harry wasn't exactly sure what the word ethereal  meant, but it was the word that came to mind. The song was perfect, the saxophone was perfect, the interplay and communication between Pepper and his three band mates was as perfect and orchestrated as the movement of four fingers on a hand….Powerful and relentless and sometimes sad.

… He had "Patricia" on other records and CDs. It was one of Pepper's signatures. But he had never heard it played with the same sinewy passion.

It occurred to me when I read this that as writers we have it all over live performers. We just need to dig down and get it right once. Okay, it may happen several times in a novel, but to become powerful and relentless and filled with sinewy passion in a particular scene? Just once.

But live performers, musicians and actors, have to dig for that crazy depth constantly. Every performance. They are judged each time, and comparisons are made to earlier renditions and other versions and even other performers.

I'm so glad I can become powerful and relentless and filled with sinewy passion privately. More or less.