I’m in the middle of overhauling my kitchen. I didn’t mean to—it was an accident, but really, it was one that needed to happen. 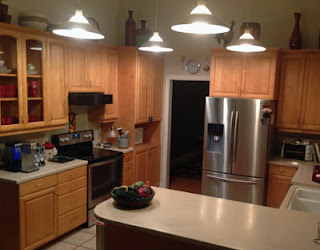 It all started when I decided I needed a new fridge. One by one, the shelves had been busting until there was only one left, and I found myself cramming everything in at the bottom. Each time I’d open the door, food would come tumbling out onto the floor, and in some cases, even spilling. In addition to that, Old Fridge was starting to make weird noises, and I noticed the chill factor wasn’t exactly, well… chillin'. I knew it was junk, that I needed to replace it, but for some reason I tolerated the inconvenience until I no longer could.

Then I looked at Tired Old Dishwasher. I’d been tolerating him for quite some time as well; in fact, each time I ran a load, although the dishes were—in theory—clean, a lot of them still didn’t look so great, and I’d end up having to re-wash them by hand. I also couldn’t ignore the fact that Tired Old Dishwasher would look like hell next to Shiny New Fridge.

Then I glanced at Sad Old Stove and frowned at my shameful neglect.

Before I knew it, I found myself at the appliance store, swiping the card, biting the bullet, and kicking myself in the rear.

Once the new stuff arrived, I smiled. I was excited. Then I eyed my dishes, and again, I frowned—so many of them had outlived their usefulness, many with chips, and through the years I had added to the chaos by purchasing more, only to have them end up in much the same condition.

I opened my silverware drawer and through weary eyes, looked inside. The flatware was akin to what one might find in a college dorm, some mismatched, some bent, and some Just Plain Ugly.

How had I let all this go for so long? In the back of my mind, part of the reasoning was based on financial concerns. I could also blame my neglect on the fact that I’ve been working too hard, didn’t have time—but it only took One New Thing to make it painfully clear that the Avalanche of Neglect had started tumbling long before then.

So, why am I telling you this? For good reason. Bear with me.

I’m all about finding the lessons in life—I even see them in the smaller and seemingly mundane things. What was my lesson here? Junk accumulates, and while it’s often right in front of us, we sometimes fail to notice it until we’re forced to. Granted, some people are better at taking care of things than I, but on some level, and to some degree, I think we all do it.

The kitchen project happened to be running alongside my writing project—I was working on the new manuscript, and all at once the parallels were difficult to ignore. How much junk was hidden among the pages? How much of it had I failed to see? Granted, this is why we have editors—to help us see what we can’t, and that in itself is a strong indicator of why they’re so vital. But even so, as writers it’s ultimately our job to find as much junk as we can before the work falls into their hands—not doing so only makes the job that much harder, forcing them to focus their effort and energy on smaller things when they need to concentrate on the larger ones.

In many cases I’ve noticed that some authors even skip that step. They don’t bother hiring an editor (and sadly, in some cases, don’t even bother proofreading their work) before sending it out into the world, junk and all. Sometimes I’ll read entire passages—even chapters—and think, “Why is this even here? It’s junk.” I guess the reason is much the same as the one that caused me to allow my kitchen to fall into such sad shape. I neglected it.

And really, when it comes right down to it, ultimately, the responsibility is ours to not only see the junk, but also to get rid of it.

How about you? Got junk?