I feel very fortunate to be able to download e-galleys of books from various publishers through services like Edelweiss, and I'm always delighted when I'm granted access to a title I've requested.  Even more so when it's by one of my favorite authors. 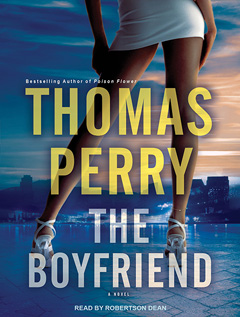 I love Thomas Perry's Jane Whitefield series, but it's been over a year since Poison Flower was published.  When I thought I saw the availability of a galley of The Boyfriend (which I mistakenly thought was a standalone), I jumped at it.  When I received approval, I was surprised to realize that it was an audiobook.  I reserve book listening for  driving, but since my trips are seldom very long, it doesn't seem worthwhile.  However,  I gamely downloaded the book, and though it took me 6 weeks, I managed to listen to the whole nine hours without too much confusion.

The protagonist of the story is Jack Till, a former Los Angeles police detective turned P.I. (who first appeared in 2007's Silence).  In The Boyfriend, Jack lives still lives in the L.A. area.  He has a 24-year-old daughter named Holly, who has Down Syndrome and lives in a group home not far from her father's home.

Jack is visited at his office by a couple who ask him to find the killer of their daughter, Catherine Hamilton.  Mr. and Mrs. Hamilton believe that because Catherine was an high-class call girl, the police are being lax about their investigation.  Jack takes the case, and soon discovers that young women who share Catherine's profession have been murdered every few months in cities around the country.  At first, there doesn't appear to be anything linking these women, apart from their appearance: they are all strawberry blonde, and similar in features and build.

But as Jack digs deeper, he learns that they were all killed in the same manner, with a 9 mm handgun, and probably by the same guy.  Jack calls him "the boyfriend", but has difficulty finding information on the man's background.  As he follows the boyfriend across the country, he discovers a seriously disturbed and dangerous man who just may be Till's match.

Robert Dean has a deep, compelling reading voice, which is a good match for the suspenseful story, and more than once I found myself sitting in my driveway waiting for a chapter to end.


FTC Full Disclosure:  My thanks to Tantor Media and Edelweiss for the audio-download of the book.
Posted by Unknown at 3:00 AM