Killing Off a Character

I killed my first recurring character recently, and it still haunts me. She wasn't particularly popular, but the manner of her death was shocking. The ending made my beta readers cry for my protagonist, but they said they loved it. And so did my publisher. So I crossed my fingers and let it go to press. 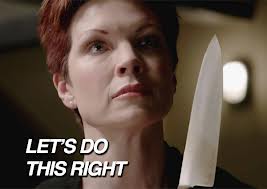 Still, I knew it was a risk. Readers complain loudly when writers kill characters. They post negative reviews and ratings and often claim they'll never read another book by the author. Some even follow through.

Television writers kill characters even more often than novelists do. Have you seen the third season of Downton Abbey? Viewers were infuriated. Or the last season of Grey's Anatomy? Ouch!

Why do authors do it? For several creative reasons and possibly one egocentric rationale. First, the self-centered reason. Literary experts say if you're not willing to kill a character, then you're not a real writer. They say you lack the courage to be realistic and daring. So killing a character is a challenge that many writers feel compelled to experience.

But that's not why I did it. If a character's full story arc has been told, and there is nothing left for that person to do, then killing him or her is essential for the series. It's only fair to readers to cut the dead weight and allow the story arc of other characters to grow and take new paths. Sometimes a death at the end of one story is the best way to set up a new story that begins with an emotional punch. Also, the action in the climax is often so intense that if no one dies, the story doesn’t feel realistic.

Another reason—which TV writers cite as their main motivation—is that killing a character creates uncertainty. Once readers/viewers realize that anyone could die, that quiet dread ratchets up the suspense.

Which is why readers and viewers keep coming back to a series even after someone they love has been dispatched. Many fans will rant and rave, but eventually they'll accept the development and find themselves ready for more. Only now, their anticipation will be greater than ever.

This pattern is probably truer (safer) for television than novels. Book lovers get more attached to their mainstays, and therefore more upset by unexpected deaths. When you kill a recurring fictional character, you will lose some readers forever.

What is the payoff for novelists? The satisfaction of telling the story the way they envision it. The freedom to take the series or protagonist in a new direction. Maybe even more important—the rush of taking a risk and the confidence that comes with surviving it.

So in Rules of Crime, book seven of the Detective Jackson series, I finally killed a character and I made my protagonist suffer for it. So far, most of my faithful readers have supported—even loved—the decision. But not everyone. I just hope the few who are disappointed will come back to find out what happens next. Book eight is written, and I've made the development pay off in an a rewarding way.

What about you? Have you abandoned an author for knocking off a favorite character? Do you give TV writers more slack than novelists? Tell me what you think.
Posted by L.J. Sellers at 5:00 AM