Definition: The nick is British slang for a prison or police station.

In this case it's the Thames Valley Police station in Abingdon, Oxfordshire. I recently spent a couple of hours inside the nick here, with a bit of it inside a cell. To date, it's the longest amount of time I've ever been inside. 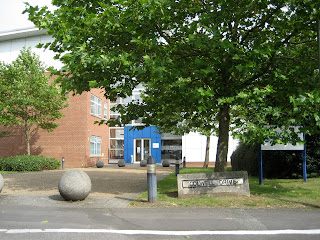 While writing STONE COLD, my first thriller set in the UK, I wanted to know what it's like inside. Apart from accuracy with the procedural stuff, I wanted to get a feel for the sights, sounds, and smells. I also wanted to understand it from a prisoner perspective and know how they might feel after arrest and while they await their fate, so on a sunny Thursday in March, Sgt. Antony Maddison met me at the police station and escorted me in to find out.

First, we did the civvy bit where I went through the smart reception area to sign in at the front desk as a visitor. With a focus on murder suspects, he took through to the communal rest area and explained the booking procedure, the circumstances and requirements surrounding custody without charge, and the process for extending a detention. We discussed legal representation, the court process, bail and the numerous conditions upon which it might be granted. Regarding a murder suspect, I learned only the judge has the power to grant bail after the prisoner has appeared in court.

Sgt. Maddison and his colleague, Nick, explained in detail the system for booking a suspect. They showed me the process and equipment for fingerprinting, photographing the suspect and taking DNA, and ran through the police national computer database used to store arrest records. There was so much valuable information, I couldn't make my notes fast enough.

Sgt. Maddison then led me round the back of the station and gave me the treatment reserved for prisoners. A stark difference.

As I re-entered the station, this time via the custody entrance used for suspects, the day suddenly felt a lot colder. I was not in handcuffs and I knew I would not be searched, yet I could imagine the sense of panic for a prisoner who would face this in a real situation.

As we went "into custody"the outer door clanged shut behind me and sealed off my "freedom." I found myself first in a holding area, where a SmartWater security search was discussed, then I was led into a search room. In a real situation, depending on the offense, a prisoner might be asked to undress in here, given a custody suit to wear while their clothes are seized for analysis. It started to feel a bit more real.

Prisoners are booked into the system and go through a documentation process, whereby prints, DNA and name are entered into the computer and sent off for a match. Results take minutes. In the custody block, the circumstances of the arrest are noted and a risk assessment for each prisoner is conducted. Prisoners are made aware of their rights and entitlements. If necessary, drug testing may be carried out.

After the booking, the prisoner is taken to the cells. What a grim place. I stepped inside one of them and Sgt. Maddison clanged the door shut behind me. The sound reverberated and the immediate sense of isolation set in. I pictured images from Escape From Alcatraz, except there was no way of tunneling out of this cell. With a window I couldn't reach or see out of even if I could reach it, I had nothing but four blank walls, a stone "bed", and a flat plastic mattress for company. I was locked inside the cell for less than a minute. It was enough.

After Sgt. Maddison let me out, he showed me the dry cells, which are cells without a toilet or a sink, used for murder suspects, giving them no chance to wash away any evidence. Once the samples are taken, these prisoners would then be moved to a proper cell...it's not much of an improvement.

Prisoners charged of a crime are remanded in custody by the Sgt. until they can appear in court, after which, unless granted bail, they are transfered to a prison cell to await trial. I couldn't help wondering how much worse that might be and decided I'll have to visit a prison next to find out.

As my 2 hour tour of the police station and cell block concluded, we covered the complete process from receiving an emergency call to dispatching officers to the scene of the crime, and how prisoners communicate with legal representation while in custody. I sat inside an interview room, and got to see inside the CCTV room, which covers far more than the average person would think. If you knew how much of a town and the surrounding area the police can see...it should deter you from committing a crime.

I got more out of this visit than I ever expected. As much of the research for my books is conducted online, it was a real treat to get out in the field and talk to those who deal with crime and criminals every day, get a feel for what they deal with and see what the prisoner endures. My huge thanks to Sgt. Antony Maddison for giving up your time and arranging such a valuable tour.