Hopefully Mr. Parks is very much unlike his imaginary alter-ego in his tendency to get himself into trouble. 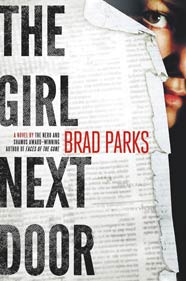 Carter Ross works for the fictional New Jersey Eagle-Examiner.  In The Girl Next Door, he is reading the paper's obituaries looking for inspiration for an article, when he comes across one for a woman named Nancy Marino, who was struck by a car while crossing the street on her Eagle-Examiner delivery route, the victim of a random hit-and-run.

Ross initially pursues the story just to call attention to a "girl-next-door" type who makes ends meet working as a waitress and delivering the newspaper, and attends her wake in order to find out more about her, but stumbles upon a loud argument between two men, one of whom is the publisher of his own newspaper.  Then, one of Nancy's sisters approaches Carter, telling him that Nancy was killed deliberately and asks him to investigate.

Carter doesn't agree, but he does begin to wonder if something is going on, and decides to continue on the story he originally intended to write, reasoning that if he does stumble across anything suspicious he can decide then.

He gets so involved in Nancy's story that he neglects his assignments (what reporter worth his salt wants to write a fluff piece about a bear wandering through the city?) which gets him in trouble with his editor.  When he's conspicuously ordered to stop investigating Nancy Marino, he quits and continues on his own.

What Carter discovers is a lot more arcane and mercenary than he expected, and uncovering the truth nearly gets him killed as well.

I prefer to start series at the beginning, but since I was looking for books published in 2012 that might be eligible for certain awards, I broke my rule and began with this one. There were no problems understanding the plot, and Carter's backstory was filled in as necessary.  I will likely read the first two books in the series when I can, because I liked Carter Ross and would like to get to know him better.

FTC Full Disclosure:  I borrowed this book from my local library.
Posted by Unknown at 3:00 AM