We've all heard of binge drinking and binge eating, but the latest indulgence is binge viewing, in which consumers download an entire season of a series and watch it in big gulps of three and four episodes at a time…or maybe even over a weekend.

I've done that with shows I came late to, such as Rescue Me and White Collar, but for some viewers, that's the way they watch everything. Nexflix's recent release of House of Cards—all 13 episodes at once—signals that entertainment companies are starting to recognize this preference and are giving customers exactly what they want.

Personal experience tells me that some readers have been doing this all along and that many others are now joining the trend. (An interesting side note: the House of Cards episodes are called chapters.)

Contributing to the binge reading pattern are the major changes in publishing. Authors who reclaim the rights to their backlist titles will often self-publish a whole series at once and market it to new readers, who have the opportunity to consume the series very quickly.

Or in my case, Thomas & Mercer bought my backlist of Detective Jackson books, revamped it, and released six stories all once. My publisher heavily targeted new readers—who are buying the whole series at once, and in many cases, reading the books-to-back in a short time. I know this because some of those readers contact me and say things like, "Once I discovered your Jackson stories, I was hooked and read them all in a week." 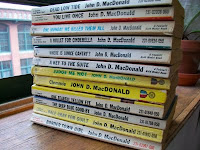 I can remember doing this when I was younger with series I discovered after the fact, such as John MacDonald's Travis McGee stories and Lawrence Sanders' Deadly Sin series. I believe the human desire to consume a whole bunch of what we love all at once has always been there.

In fact, many mystery fans won't even begin a series until three or four have been released. They want to know that there is more of a good thing once they get started.

But only recently has the binge viewing opportunity occurred with television because of the confluence of digital recording, Netflix, and new entertainment companies. Yet it's become so popular so quickly that it makes me wonder if watching weekly TV episodes will become a thing of the past, even if broadcasting companies continue to release them that way.

Now with the major changes in publishing, the opportunity for binge reading is greater than ever too. So I also think that publishers (including authors) might starting waiting until they have at least three books in a series before releasing them.

From a marketing perspective, it makes sense. Promoting a whole series at once is not only cost-effective, it can earn reader loyalty much more quickly.

What do you think? Are you a binge watcher or reader? Do you ever wait for a series to have three or four books before trying it?
Posted by L.J. Sellers at 5:00 AM