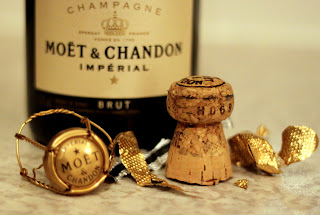 Pop open some bubbly and celebrate with me.

Thursday afternoon, which was three months and two days later than planned, I finished the first rough draft of a manuscript I thought would be easy to write—because I'd already written it. A simple little rewrite. How hard could that be?

That was way back when. I shouldn't have bothered to ask the question. It only took me about two days of "rewrite" to understand I needed to make it into an entirely new story. Ahh . . . there's a reason I referred to it as the first rough draft. (For more on what I learned about the process, check out Suspense Novelist.)

Gag me, but I was cool. I'm always down with making something better. But between you and me, faster would have been good.

Gayle's post on Thursday hit home, and not in a good way. Well, kind of . . . because the woman is funny. And spot-on. But I sat at my desk with these last few scenes to write, and they were like spreading cold butter on a thin cracker.

These scenes were so clear in my head. Bingety, bangety boop. Done. Well {gulp}, then I had to write them—the very last few scenes. And they needed to make sense. As I said, cold butter on a thin cracker. The only thing that made me finish was the way I'd told God and everybody I would. Pride before the crumbled cracker, so to speak.

When I finish a manuscript (this is my third, or is it my fourth?), there has always been a little postpartum thing going on. But not this time. I have another completed story that's been sitting there—a good one, I think—waiting for me to begin the long, laborious process of editing it. I can't say the finish line for this one made me want to launch my lunch, but it remained a little evasive. Maybe it's that other manuscript that froze my progress? Is it too late to hurl?

But I'm done with this first draft of this one story, and happily reporting that little fact to you.

I took the rest of Thursday off. Sort of. And Friday I intend on doing a little organization before getting back to work.

And bring my butter to room temperature.