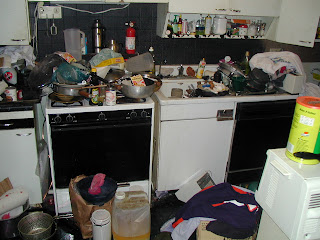 You often read text books comparing CSIs to archaeologists. In some ways that’s a great comparison. Like archaeologists, we examine “artifacts” left behind from human activity (crime), and endeavor to determine the events occurring at a particular location as well as something about the owner. Having my undergraduate degree in Anthropology I might appreciate these factors a little differently than other CSIs.

You see, one of the most interesting aspects of my old job was not the investigation of crime; it was the investigation of people. How they lived, what they surrounded themselves with, what they valued, and what they didn’t. When I went to a crime scene, I put on my anthropologist's hat. Getting an unvarnished behind-the-scenes look into people’s lives has a way of shattering any paradigms one has. The compass heading that once pointed towards “normal” now spins wildly in all directions.

That’s because, as the old saying goes, truth is indeed stranger than fiction. In fact, new CSIs sometimes have a hard time allowing those old paradigms to die. Everyone tends to believe that other people are just like them. I’ll wager that, as authors, you’ve all written a scene, then trashed it saying “nobody would ever do that.” Am I right? After all, aside from subtle differences, we all have the same bearing on right and wrong, don’t we? Nope.

Most people assume it’s the blood and brains that must be the hardest to take as a CSI. The truth is that you come to expect finding blood and brains. What you don’t expect to find is what really plays with your mind. How people can live in abject squalor with dead pets and feces scattered around. How a father will spend all his family's income on booze and car rims while his children starve to death. How a child molester, who thinks nothing of the pain he inflicts on the innocent, can rant about the “evils” of eating meat.

I guess what I’m trying to say is that there is no “normal.” There’s just behavior. Now I’m not suggesting that you throw the rule book out the window and create a behavioral free-for-all with your characters. But criminals, by definition, are rule breakers. It’s a state of mind and a state of being that goes beyond the written rules of man. This condition transcends society's morals, dogma, and etiquette. Thankfully, the degree to which criminals are willing to bend these rules varies greatly, but they do vary. Extremes are still extreme, but the fact that a sliding scale exists gives you some latitude in creating characters and scenes.

Think of all those bizarre and horrifying news stories you read about abusive parents, serial rapists, and child killers. Then recognize the fact that the media only reports on a tiny portion of crimes and almost never has all the facts. These horrible acts are merely snapshots in the life of a criminal or deviant. While some of these are crimes of passion, most criminals don’t wake up one Tuesday morning and decide they’re going to shed all their family values. So the next time you find yourself rejecting a scene or character because they don’t fit your notion of “normal,” ask yourself this question: What’s “normal”?
Posted by Tom Adair at 5:55 AM