by L.J. Sellers, mystery & thriller author
Last fall my husband started building his seventh trike, just as I started writing the fifth book in the Detective Jackson series (and my tenth novel). Dying for Justice was released in March, just as Steve took his first ride on the new trike. Always having a creative project in the works is one of the bonding elements of our 23-year relationship. He listens while I talk about plots, publishing, and promotion, and I listen while he yaks about Type 1 Volkswagen engines, fiberglass bodies, and adjustable foot pegs. He reads my novels, and I take trike rides with him. I believe he gets the better deal, but I’m biased. Still, I think the three-wheeled motorcycles are so cool, I’ve given my main character, Detective Jackson, a trike-building hobby.

You wouldn’t think a three-wheeled motorcycle and a crime fiction novel have much in common, but the creative process is surprisingly similar. Both start with a concept, a simple idea that each of us has been thinking about and can’t wait to develop. For me, it could be a vivid opening scene or a character that sparks the whole novel. For him, it’s often a type of engine or a new way to connect the two halves of his vehicle.

Next is the planning/designing phase. The first part of this process is all mental. We both spend a couple of weeks thinking about our projects, turning them over in our minds until they began to take shape. I can look at the expression on his face and know he’s thinking about his next trike. Honey, you’re focused on your trike and haven’t heard a word I’ve said, have you? On the other hand, I do a lot of my brainstorming while I’m exercising. (Those endorphins help produce some great plot twists!)

Then the tangible planning takes place. For me, it means outlining. Determining and plotting, day-by-day, what happens in the story and in the investigation, then mapping it out in a Word document. For Steve, my trike builder, planning means drawings. He starts with a pencil drawing of the whole trike, then progresses to CAD versions of all the individual components, including dozens of parts for the frame alone. We each modify our plans as we go along, seeing what works and what doesn’t. 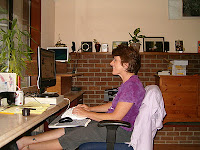 Then he starts building and I start writing. For both of us, this is the hands-on work, the joy, and how we spend the bulk of our time. We’re both happiest in the crafting phase. Of course, we have occasions when we get stuck. I’ll realize a plot element doesn’t work because of wrong timing and have to back up and revise. He’ll recognize that two components don’t fit together the way he envisioned, so he’ll stop and redesign.

But it’s just part of the process. We know from experience that we’ll work through whatever glitches we encounter. In all our years, he’s only abandoned one trike project, and I’ve only abandoned one novel. (But my agent at the time discouraged me from it, and I may finish the thing yet.)

I don’t mean to imply we’ve always worked in tandem—in fact, we’re often in different phases—but we do have a similar process and timetable. And eventually, we both end up with a finished product that we’re proud of. Some people insist that what we both do is art, but we think of our projects as crafts…and now, small businesses.

Here’s where the difference comes in. Steve sells each trike (or motorcycle) to a single individual to enjoy, and I sell my novels to thousands. But we both love what we do and can’t imagine our lives without a project in the works. Sharing a creative compulsion is a big part of what keeps our relationship healthy.

What is your creative process or hobby? Share it with us!