Blog hops are sort of like the latest variation on chain letters—you hate to break the chain, yet wonder if all the hassle will really bring you good luck. But when thriller author Peg Brantley asked me to join this series on The Writing Process, I was delighted to take part. Talking (or blogging) about what we do is reminiscent of show-and-tell in second grade, an opportunity to contemplate and brag a bit about how we approach this business. It also gives me a chance to see how others whose work I admire practice their craft. (Who knows, I may end up stealing some terrific ideas.)

Peg posted her answers to four burning questions last week on her blog, which you can find here. http://suspensenovelist.blogspot.com  In turn, I tagged three terrific mystery/thriller authors—Timothy Hallinan, Paul D. Marks and KT Bryan—about whom you can learn more at the end of this post. They’ll be giving their own answers to these questions next week, on May 26, 2014.

These three authors were kind enough to agree to perpetuate this blog hop, but I chose them for a reason. Tim Hallinan writes the kind of books I wish I could write—tense, intricately plotted, with emotional heart and prose so beautiful it literally makes me weep. KT Bryan should be way better known than she is because her books fit neatly into the pantheon of women authors who write tough characters, and here I’m thinking Allison Brennan, JT Ellison, CJ Lyons, Alafair Burke and LJ Sellers. Her books are not for the faint of heart and her style propels her stories like a naturally aspirated 5.0-liter DOHC, 32-valve, direct- and port-injected V8 engine with variable valve timing, that is to say quickly and smoothly. Paul D. Marks is an under-appreciated author of Shamus Award-winning tough-guy novels in the best of the L.A. noir tradition.

I’m finally making decent headway on Night Strike, the fourth Blake Sanders thriller. Night Blind, the first in the series, was nominated for a Thriller Award by ITW, which was both an incredible honor and a challenge. My goal as an author is to write every book better than the last one, but ITW raised the bar for me with that recognition. 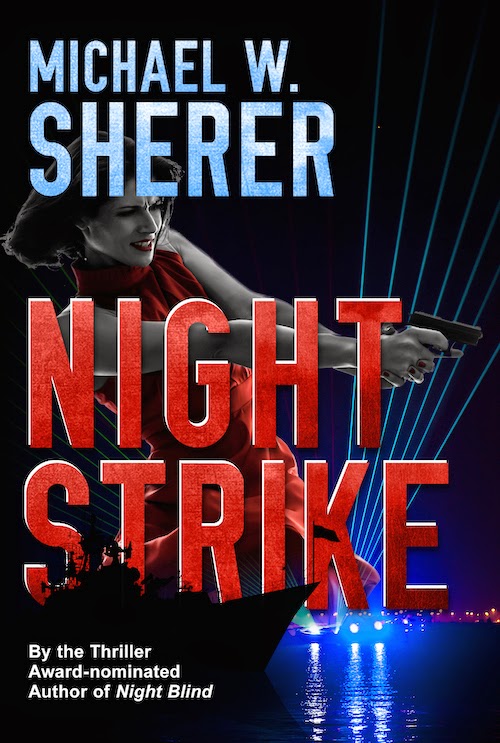 Even before the nomination, I knew that this book had to be bigger in scope, both geographic and thematic, than the three previous books in the series. A large part of what made Night Blind work is Blake himself. Though the plot involves large-scale thriller elements like a Civil War era secret involving nearly a quarter of a billion dollars in buried gold and a potential bio-weapon that could start a pandemic, it’s Blake’s story that keeps the book on a personal level.

To broaden the scope in Night Strike, I’ve brought back not only Blake’s romantic interest, naval intelligence officer Reyna Chase, but also Trip Macready, a character introduced in Night Drop, the third in the series, out this Sept. 8. And I’m giving larger roles to some supporting characters, which gives me the opportunity to tell the story from more points of view.

Thematically, the book borrows from current geopolitical situations and the rising tension between the West and Russia. What starts as a promise from Blake to a dying man ultimately leads to a confrontation between Russia and the U.S. in the middle of the Pacific, and only three people—Blake, Reyna and Trip—can stop it from escalating to war.

2. How does my work differ from others of its genre?

I can honestly say I’ve never read a book quite like this particular series. That’s not to say they don’t exist, just that I haven’t come across them. My Chicago-based Emerson Ward mystery series was likened by The Chicago Tribune, among others, to the Travis McGee books by John D. Macdonald. But the Blake Sanders thrillers are a little tougher to pigeonhole. They don’t fit neatly into any thriller subgenre though they do have elements of a military thriller, a techno-thriller, a conspiracy thriller, and more.

Blake is, in most respects, an fairly ordinary fellow, with no special training and no special skills to help him in his battle against better equipped foes. Three things do set him apart, however: his ADHD, which influences both his behavior and the way his thought process works; his extraordinary height, which is both a help and a hindrance; and his tenacity. He fights not just for his life and that of those he loves, but also for his own set of moral values.

And, for me, the writing is as important as the story. In that I try to emulate authors whose work I admire—Hurwitz, Crais, Hallinan, Unger, Huston, Parker, Flynn, Sakey, Winslow, etc. All too often I’ll pick up a book and start reading a fast-paced story with interesting plot twists only to finish feeling vaguely unsatisfied, as if I’d just eaten Chinese food, knowing that I’ll be hungry again in an hour.

I write books I’d like to read. Though I enjoy a wide range of fiction, I’ve been drawn to mysteries and thrillers ever since I discovered a Judy Bolton mystery on the shelves of our “library” at home. Our ranch-style home on the farm where I grew up had a small study that contained a small spinet piano and nearly a wall of books. The few Judy Bolton novels on the shelves had been given to my mother when she was a young girl. I went on to devour Agatha Christie, Rex Stout, Dick Francis and many others on my way to becoming an author myself.

I like stories, particularly stories that move, stories with pace and action. But I also want to learn. Genre fiction is story-based, but also can deliver the same lyrical beauty of “literary fiction,” the same moral dilemmas, the same depth of character. (For a terrific take on “genre” vs. “literary” fiction, see Tim Hallinan’s two-part blog at “The Blog Cabin.”)

Mysteries and thrillers also gives me, and the reader, a few things that other fiction sometimes does not. Usually, they have definitive endings as opposed to the nebulous, indeterminate conclusions of literary fiction, especially. They may not always end happily, but most of the time, the good guys win and justice is served. When nothing in life is certain, I think mysteries and thrillers offer readers a sense of order in a world of chaos.

4. How does my writing process work?

Most authors fall into one of two camps—“pantsers” and “plotters.” The former jump into each book feet first with no idea what it’s about or where it will end up. The latter rely on a carefully crafted story with a beginning, middle and end, usually noted on paper somehow (outlines, sticky notes, white boards are some tools writers use).

I’m a “plodder,” which is to say I not only rely on detailed notes and an outline that serves as my roadmap, but I work slowly and methodically. I have to know the beginning, middle and end of a book before I can start writing. And unlike writers who can jump around, writing a scene here and another there and eventually assembling them all into a whole, I write linearly so I know how the story develops, and don’t forget things when I come to later scenes.

However, having a roadmap doesn’t mean I don’t get sidetracked and take the scenic route on occasion. These diversions are part of my creative process and often are the most delightful surprises of writing every book. Last week, for example, as I was writing a chapter, a character that I’d designated as a Chechen mole aboard a Russian destroyer turned out not to be the mole at all, and the book will be better for it.

I use what I call the A.I.C. writing method—ass in chair. Unless I’m on deadline with another project, I try to write every day. I keep regular office hours, and have my latest chapter open on my laptop even if I’m not working on it. Every day that I devote to writing, I start by rewriting what I wrote the day before, which gets me into the story, and I go from there.

I research heavily, even more than I used to, because it’s easier now with the Internet and because it’s easier for readers to catch me in a mistake than it used to be. I do a lot of my research during the plotting phase because I need to know how things work in order for the plot to work. But I research while I write, too, using Google Maps, Street View and satellite views to work out logistics and get a sense of places that I can’t get to in person.

For me, writing is slow work. Typically it takes me a year to 18 months to research and write a book. In the seven years since I started the Blake Sanders series, I’ve written five complete novels—three in that series and two in a YA thriller series—and part of the book I’m working on now. It is often, as Tom Clancy once said, “like digging dirt.” But because there are gold nuggets and precious gems in that dirt, for me writing is the most rewarding career I could have chosen.

Next week, be sure to find out how these amazing thriller authors approach The Writing Process: 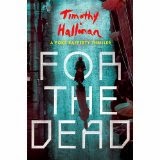 Timothy Hallinan has lived, on and off, in Southeast Asia for more than 25 years.  He wrote songs and sang in a rock band while in college, and many of his songs were recorded by by well-known artists who included the platinum-selling group Bread.  He began writing books while enjoying a successful career in the television industry.  Over the past fourteen years he has been responsible for a number of well-reviewed novels and a nonfiction book on Charles Dickens.  For years he has taught a course on “Finishing the Novel” with remarkable results – more than half his students complete their first novel and go on to a second, and several have been, or are about to be, published.  Tim currently maintains a house in Santa Monica, California, and apartments in Bangkok, Thailand; and Phnom Penh, Cambodia.  He is lucky enough to be married to Munyin Choy-Hallinan. http://www.timothyhallinan.com

KT Bryan is an action, adventure, romantic suspense novelist who enjoys good wine, great art, Tuscany, and a touch of mayhem. (You never know what you might see when you wake up suddenly in the dark.) She's the author of the TEAM EDGE series. KT currently lives in Georgia with her family, one overweight German shepherd and two very spoiled cats. She has a varied background in the military, the airlines, antiques, and medicine. Her favorite career is writing and sharing stories with readers and fellow writers. Find her at www.KTBryan.net or on Twitter @KTBryan1. 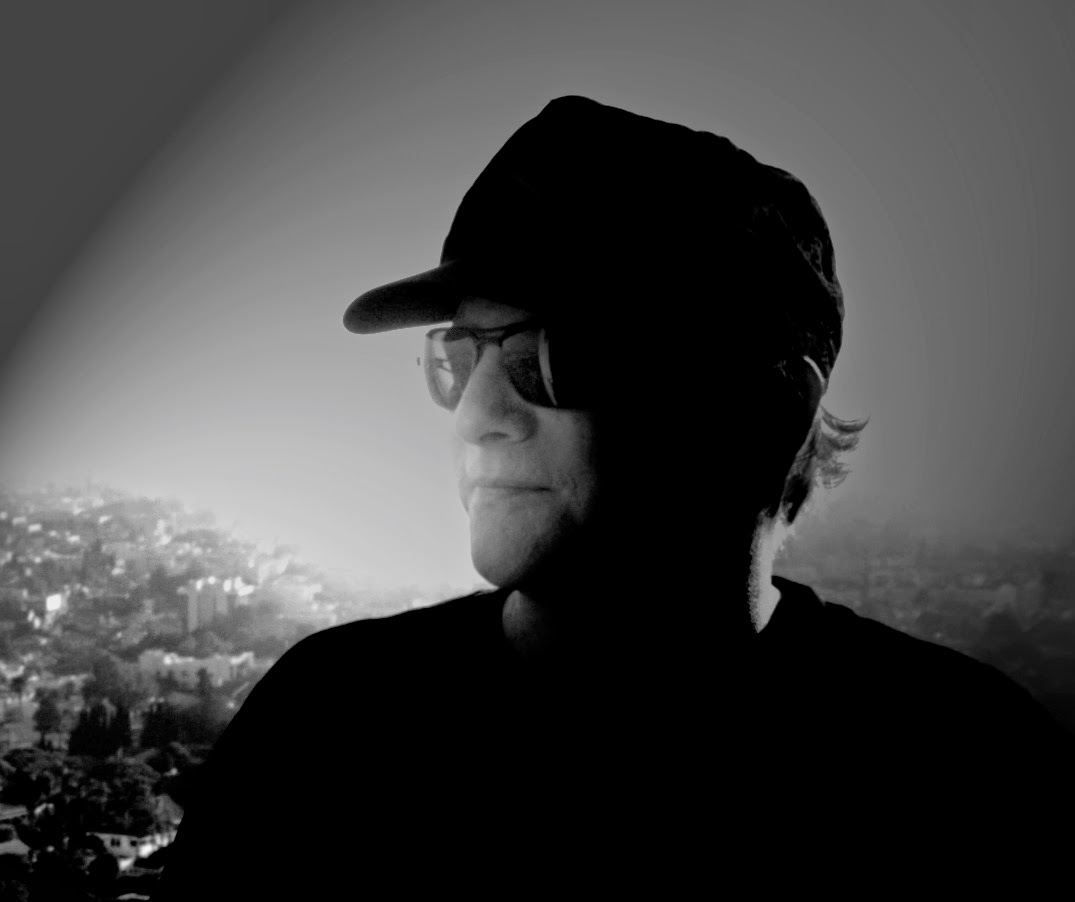 Paul D. Marks' novel WHITE HEAT is a 2013 SHAMUS AWARD WINNER.  Publishers Weekly calls WHITE HEAT a "taut crime yarn."  Paul is also the author of over thirty published short stories in a variety of genres, including several award winners – and LA LATE @ NIGHT, a new collection of five of his stories.  And he has the distinction, dubious though it might be, of having been the last person to film on the fabled MGM backlot before it bit the dust to make way for condos.  Find out more at: www.PaulDMarks.com , www.facebook.com/paul.d.marks