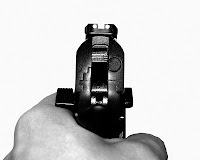 I can't wink without screwing up one whole side of my face. That reason alone made me leery of ever shooting a gun. That whole aiming thing.

Even though I would never go on for pages and pages writing all sorts of fine details regarding weapons—because the only people likely to still be awake at the end would be those readers looking for an error—I still have an interest in developing a personal understanding of guns. Hand guns in particular. How to handle them. What recoil might really feel like. To help me be a better crime fiction writer. Plus I'm slightly competitive and targets are a good way to measure success.

A few years ago I attended Writer's Police Academy in Greensboro, North Carolina. One of my favorite take-aways was the FATS (Fire Arms Training Simulator) sessions I participated in. Though only air guns, I shot a Glock and a Sig-Sauer. And did a lot of yelling. "Drop your weapon! Now! Do it! Do it!" No one was rushing to sign me up as a ringer in a shooting competition, but I didn't embarrass myself either.

Since then, I've had a range date with my husband and completed a basic pistol course that included a little more time on the range. And now, since I can, I've decided to apply for a concealed carry permit.

Which is where the horse has stopped cold.

I appreciate that our county requirements are tough when it comes to allowing people to carry concealed weapons. I think it's a fine thing that drug addicts, alcoholics, convicted felons, fugitives from justice (yes, they actually ask that question on the form) are routinely denied the right to hide a weapon on their person.

But trying to provide them satisfactory proof that I have lived in the house I've lived in since 1985 wasn't the slam-dunk I thought it would be.

The only acceptable proof is one of the following three things: a "current utility bill with the applicant's name and address" (this is the preferred proof); "current lease or rental agreement"; or a "notarized statement from the owner verifying the applicant's residency if the property listed as the applicant's residence is owned by another party." Technically speaking, I can't provide any one of those things. Not one. The utility bills only reflect my husband's name. We don't rent. We both own the residence. No other proof of residency is acceptable. (For purposes of full disclosure, we're not 100% sure on the utility bill thing since they'd already been paid and we didn't have them laying around, and I have drawn up The Stupidest affidavit in all of history as a last resort.)

The state legislature is currently discussing a proposed bill that would allow people who've been convicted of less serious crimes to obtain a concealed carry permit.

It appears that it might soon be easier for a convict to carry a weapon than a wife. Planned, do you think?