Giving Readers a Bonus with Maps and Lists

After a lively discussion on the DorothyL mystery list-serve, I decided to add a map and a list of characters to my Detective Jackson books. One person in the discussion said she would “never read a book” that included a list of characters, but so many others supported the idea that I knew I wanted to provide the information. Fortunately, my new publisher (Thomas & Mercer) was willing.

In today’s world of content marketing, interactive media, and bonus features, giving readers a little something extra seems like a good idea.

We placed the character list in the back of the books, so it’s there for people who want the reference, but it’s not up front where the connections might possibly spoil some of the surprises. And I was careful not to include descriptive phrases such as “sister of the killer” so the list shouldn’t be a spoiler even if readers see it first.

The map is just a bonus for people who like a visual orientation. We placed it in front, and it only includes a small portion of central Eugene. But at least readers will be able see where the police department is in relationship to the jail and the university, for example. 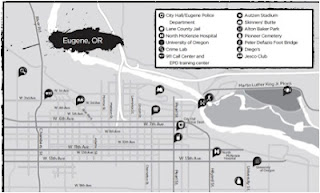 But including the map created a few questions and issues.
The character lists, however, are unique to each novel and include both recurring characters and new characters that appear in that story only. Some character descriptions may change over the course of eight novels, but noting those changes will only help readers follow the character development.

What do you think? Are maps and character lists helpful? And does the medium—print or ebook—make a difference? What else should I include?

PS: If you haven't tried the series, I'm giving away the first book, The Sex Club, on Amazon today and tomorrow.
Posted by L.J. Sellers at 5:30 AM