By C.J. West
In recent months I’ve been a passenger while my daughter drives on her learner’s permit. My life has flashed before my eyes once or twice and that reminded me of a fantastic experience I had on tour two years ago.
I hosted an advanced driving class with Anthony Ricci from Advanced Driving & Security, Inc. Anthony is an amazing driver (I’ll prove that in a bit), and his class on situational awareness and driving techniques is incredible. We spent an hour in the classroom and then spent about two hours on the track. It was an incredible day on a converted airstrip on the Rhode Island coast. 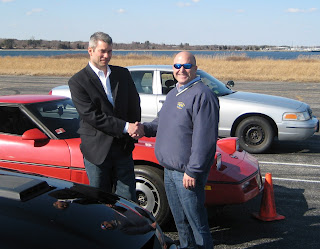 I learned several things from Anthony, but one thing has really stuck with me. A week before our session I sat in class with real bodyguards. These guys protect Fortune 500 CEOs and high value government officials. I was surprised by all the math. Lots of math. They calculated G forces and turning radii. After a while I guess they realized I was surprised and they told me something I’ll never forget.

Their lives literally depend on their driving. My daughter might kill me by running into a tree or an oncoming semi, but these guys have bigger problems. If they get chased and flip the car, the pursuers come up and shoot them before they do anything with the principal. They might only kidnap the exec in the back seat, but any wreck during a chase is fatal for the driver. It put a whole new perspective on driving for me and I’ll never forget the seriousness in the room when we had this discussion.

A week later I brought a group of fans to the classroom and then the track.

There was so much great information in the course I couldn't possibly do it justice here, but I want to share some of the things I learned because it is great information even if your most important passenger is three years old.

Anthony talked a great deal about situational awareness and how important it is to pay attention to subtle cues in traffic. You might not be a kidnap target, but there are idiots out there ready to crash into you because they are on a cell phone, or talking to a child in the backseat.

Anthony showed a series of photos taken on a busy street and asked us to identify which parked vehicles posed a threat. We learned to watch for illuminated tail lights, exhaust, presence of a driver, and one thing I hadn’t thought of, wheels turned toward the traffic.

On the track Anthony emphasized the importance of knowing your vehicle and positioning yourself properly. Here are some quickies from the track:

If you’d like to meet Anthony and take one of his classes, visit him at Advanced Driving & Security, Inc.
Posted by CJ West at 12:03 AM