Travel journalist Lily Moore takes a press junket to a resort in Acapulco.  She's a little surprised at how well she's treated on this trip:  business class flight, then a suite at the Hotel Cerón.  Also surprisingly, there are few other guests at the hotel, but the staff inform her that the place hasn't opened to the public yet. 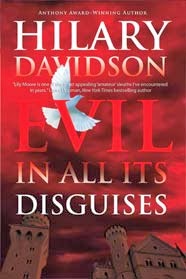 She's taken aback yet again when she runs into another travel writer, Sky McDermott, who doesn't look well:  not only is she much thinner, but she appears to have been recently weeping.  She brushes aside Lily's concern, attributing her appearance to allergies, but Lily can't help but sense undercurrents of ... something.

Over drinks, Skye tells Lily that she's planing to write an investigative piece, in order to get even with someone she was recently involved with.  When she leaves their table in the bar to make a phone call, but doesn't return, Lily becomes more uneasy.  Then she learns that the hotel is part of an umbrella group owned by her ex-fiancé, Martin Sklar, and she's certain that something is amiss.

Hilary Davidson has also been a travel writer, so Lily's professional life is based on her own experiences, but it's her skill with language that makes her prose superb, as evidenced by the opening paragraph of the first chapter:

The snake had coiled itself halfway around my ankle by the time I spotted it.  Cool and smooth against my skin, it inched across my sandaled foot, turning its head back and upward to meet my gaze.  Its slender body was striped with red and yellow and blackish brown. Even though its eyes were all but invisible in its glossy dark head, I was sure it was regarding me with pure defiance.


Her proficiency extends to the construction of the plot; the story is enthralling and very difficult to put down.  It's easy enough to understand what's going on if (like me) one hasn't read the previous books in the series.  I'm definitely going to the library as soon as I can to find them.


FTC Full Disclosure:  Many thanks to the author for the advance reading copy of this book.
Posted by Unknown at 3:00 AM