How many authors base all or, more likely, part of their fictional characters on relatives, friends, business colleagues, and law enforcement authorities?  Even someone sitting at an outdoor café can be grist for the mill. Perhaps the old gent at the next table owes his nervous tick to World War II;  maybe the pretty woman sitting alone keeps checking her watch incessantly because a lover is late.

One of my own favorite character studies was as close to home as you could get: my mother. A Brit, as I am, who lived in Cornwall and other small seaside towns all her life, she had the most curiosity about everything than anyone else I’ve ever encountered. I remember most vividly her total embrace of and interest in everything American after she’d crossed the Big Pond for the first time to visit me and my family in Connecticut where we’d settled after living abroad.

Her first time here was during Thanksgiving week and she took to its festivities with great delight. She was intrigued by the Pilgrim figure candles I bought, the Thanksgiving tablecloth and napkins, the fall wreaths and bouquets, and the Great Turkey Feast. In fact, when she left she filled a small suitcase with many of these items. She intended to hold her own Thanksgiving back home each year, no matter the irony.

While I didn’t steal many of my mother’s traits, the truth is that Tosca Trevant, the amateur sleuth in my debut mystery, Digging Too Deep, is - surprise –  a Brit. A gossip columnist, she’d discovered a scandal at Buckingham Palace and is rudely hustled out of London practically by royal order and forced to live with her twenty-six year old daughter in Newport Beach, California. Tosca is not quite as thrilled with the local culture as my mother had been. No nearby teashops and the one she finds doesn’t warm the pot first; her leather miniskirt from her Carnaby Street era evokes remarks, and she waits impatiently each day for a nice, long drizzle, brolly and wellies ready at the front door. For lack of royals to write about in her new environment she decides one day to weed the unkempt rock garden belonging to her neighbor, a renowned music professor.

During her digging, accompanied by mild cussing in Cornish, she unearths skeletal remains. Aha! A chance to be promoted from gossip columnist to crime reporter and return in triumph to England. Sunny California be damned. The story takes off from there and the investigating begins. Tosca’s own curiosity knows no bounds. She and her sidekick, a retired Secret Service agent and geologist who harbors his own secret, uncover coded music clues and more murders. 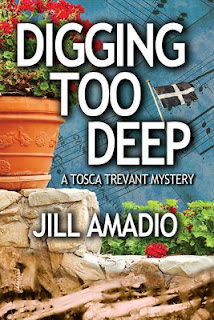 As can be imagined, my research into classical music, geology, bones and other matters was extensive. I even cajoled Rhys Bowen and her Welsh heritage into checking out how to pronounce a couple of Cornish expressions. Cornish and Welsh are similar and among the six Celtic languages. I also found a Professor of Cornish in Redruth, Cornwall who provided me with a list of rather strange swear words. When he’s not teaching he’s a fierce defender of the Duchy of Cornwall and hopes to see it someday freed from Great Britain. Shades of America! On the cover of Digging Too Deep I pay tribute to his fight by including a flag of Cornwall, a white cross on a black background.

As for Thanksgiving, I experienced my first one in Westport, CT  and went whole hog with décor and food. At turns mystified and fascinated, my mother couldn’t understand why we accompanied the turkey with cranberries and demanded to be told the entire history of the meal. To her, fruits were strictly for pies. Mixing sweet and savory used to be considered almost pagan. In fact, in the UK many people eat pancakes without syrup. While times have changed, of course, my character, Tosca, still clings to a few British habits including brewing her own Cornish mead from medieval recipes. She foists the result upon reluctant neighbors and that’s how she comes to meet the murderer.


As for me, I feel blessed to live in America, and wish everyone a wonderful Thanksgiving and the reading of many mysteries.
http://www.jillamadio.com/
Posted by Sheila Lowe at 12:00 AM