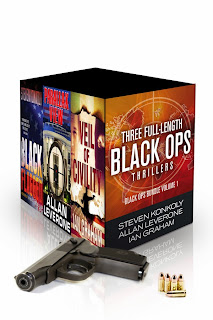 After a month-long march complete with heralding trumpets and marching pikemen carrying signs of sales, the calendar finally rests on Black Friday and the holiday shopping season has arrived. The internet is replete with advertisements for incredible bargains, and Amazon’s Kindle Store is no exception. Every season, entrepreneurial authors looking to lift their visibility and boost book sales come up with new and interesting ways to attract reader attention, and this year, more than any other, seems to be the year of the boxed set.

All over the Kindle-verse, sets featuring multiple books packaged together are popping up. Some sets feature two or more titles from a single author, while others feature titles by different authors, but with a common theme such as romance, crime, horror, or politics. Last month, Allan Leverone, Steven Konkoly, and I decided to have a go at our own boxed set, and the Black Ops Bundle, Volume 1 was born of our efforts. Jodie contacted me about sharing our book-bundling venture with CFC readers & writers.

As is true with any book project, the behind-the-scenes work is just as important as the final product. Here are some quick points to think about if you're considering taking this avenue yourself and a bit about what we’ve learned along the way.

1) How many authors will be involved?

Whether you already have a group of author friends you’re going to work with or you’re planning on approaching other authors, this should probably be one of the first things to be decided. When we first began talking about our boxed set, we decided that a small number of authors would be best. There are boxed sets available that have as many as nine authors featured, but the minimal amount of space allotted to each author on the cover design doesn't do much for any one individual in terms of visibility, and may, in fact, do a disservice to that author’s brand. Additionally, as with anything, the more people involved, the more opinions there will be on every step of the process, potentially making the planning and design phases very complicated. So, less is more.

2) How will you price your boxed set?

Prices for boxed sets do not seem to go much higher than five or six dollars, with the emphasis on value. Many sets are priced much lower, several as low as .99. The more authors you have involved, the smaller each slice of the pie will become. Splitting royalties nine or ten different ways hardly seems worthwhile for any one individual, even if sales climb into the thousands. Of course, the reverse side of this is if you have multiple titles available and plan to feature older works by each author. In this case, perhaps the chance at gaining additional readership by being placed in a set with other authors is more important than profit.

For the Black Ops Bundle, we decided to go with a middle price point of $3.99. This means a reader can purchase three well-reviewed, full-length novels for a little over a dollar each, which is an incredible value. Additionally, at this lower price, someone who has read one of the books featured in the set and liked it may not think too much about re-purchasing it for the other two books. In an effort to trip the all-important Amazon algorithms, we are planning several promotions throughout the month of December that will temporarily lower the price in the hopes of catching a larger profit from the increased visibility after the promotion ends.

3) Who will handle the publishing of the set and take on the paperwork burden?

If you’re planning on only featuring books from one author, then this point doesn't really affect you, but if a multiple-author boxed set is what you have your eye on, this is vitally important. Combining products by multiple individuals means dealing with multiple individual businesses, each with their own tax liabilities. Unfortunately, Amazon does not have a feature that allows for multiple payees, so one person will have to publish the boxed set through their vendor account and take on the burden of paying the other authors involved. This means that the income from the boxed set, for tax purposes, will be placed on the publisher and whatever business entity they have set up.

If all authors involved live in the United States, this isn’t a particularly difficult issue. Once the publisher is decided upon, each author should submit an IRS Form W-9 to that person so they can be easily, and properly, identified when it comes time to file taxes. To avoid paying taxes on all of the income associated with the boxed set, the publisher will need to file a Form 1099 on each individual author, which will list the amount of money paid to that author and shift that amount from the publisher's income column to the expense column, and will make the individual author responsible for paying any taxes associated with that amount of money.

If you're not in the United States, or if you're dealing with authors located in more than one country, I would recommend seeking the advice of each country's taxing authority or a qualified professional accountant.

Authors, I hope you have found this post informative and helpful. Please take a moment to leave a comment and let me know. 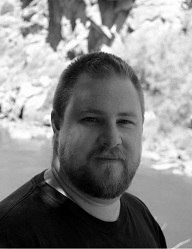 Ian Graham is the author of one novel and two short story collections in the Black Shuck political thriller series featuring former IRA volunteer turned American patriot, Declan McIver. The first full-length novel in the series, VEIL OF CIVILITY, has received praise from professional reviewers in both North America and the United Kingdom, and was chosen as e-thriller.com’s Thriller of the Month for September 2013. To learn more about the Black Shuck thriller series or to connect with Ian, visit www.iangrahamthrillers.com.