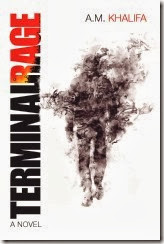 [Note from Jodie: I’m swamped with work so am ceding my spot again today to my friend and client,  talented author A.M. Khalifa, whose just-out (Aug. 30) gripping international thriller, Terminal Rage, is definitely a bestseller-in-waiting. But don’t take my word for it – read this stellar review. Take it away, A.M.!]

Writing is a lonely profession. It’s just you, the writer, interacting with your tools to create universes and characters of which you are master. If you are a mystery or thriller writer, you construct underlying puzzles and crimes and decide which characters you will send in harm's way to resolve them. Their lives and futures are in your hands.

But what if you decided to take a chance and surrender custody of your characters and plot line? This is exactly what I sought to do when I started a literary experiment called the 444project.org.

A few months ago, I had written a short story about a man who wakes up on a beach not knowing how he got there and remembering everything about his life except his name. I set it aside for a while as one of many writing projects I had going on at the same time.

When I came back to it, I realized it was exactly 444 words. And I had another thought: I couldn’t help but feel sorry for my main character. The mystery of how he got there and any chance of salvation and resolution lay with me, and me alone. Of course I knew how he got there and how it would all end. But what if there were alternate story lines that would bring forth different outcomes and endless possibilities?

I decided on a whim I would for a change voluntarily give up my rights as an author to this story line and share it with other writers. But there were a few catches: Each subsequent chapter must always be exactly 444 words. And the story will end when 444 writers have participated. And each contributor must recruit the subsequent writer with only one guideline: That they firmly believe this writer to be better and more skilled than they are. The idea was to create a “fiction moving forward” momentum, where every piece is better than the preceding one.

The results of this experiment have so far been nothing short of astounding. Mass collaborative writing is highly instructional – and stimulating. I am learning from writers who are building upon the infrastructure I laid down. We are only up to chapter six, but never in my wildest creative spurts would I have imagined what my five co-conspirators have come up with so far. I am no longer just one of the writers, but I am also a reader – biting my nails, unable to wait for the next chapter.

Because I have no control on the recruitment of successive writers, something quite special is brewing. Writers from all genres are intersecting on this venture. I see myself primarily as thriller writer. But the people who’ve participated so far come from science fiction, steam punk, fantasy, and horror backgrounds. The identity of the story is developing almost as a genre of its own that mixes all of the writers' influences without coming across as disjointed or Frankensteinian.

Being the master of your narratives is a powerful and intoxicating aspect of being an author. So to be willing to give up that control has been difficult, but ultimately liberating. And it proves that collaborative writing is not only possible, but one with boundless possibilities and its own pleasures. Of course, the 444 Project is collaborative writing on steroids, but it has made me open and ready to co-write with someone else at some point in the future.

I would like to hear from other mystery, crime and thriller writers: Would you be willing/able to collaborate with another author? And what do you think the main challenges of such a venture would be?

And readers, would a mystery or thriller written by more than one person be an attractive read, or would you be troubled by the potential duality of voices? 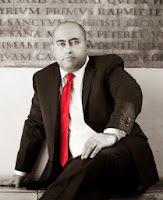 Participation in the 444project.org is by invitation only. However, interested authors can submit an expression of interest on the project's web site for possible inclusion should circumstances change.
Posted by Jodie Renner at 1:00 AM