I've just returned from hosting a conference at the beach in Oxnard, California--not for writers, but handwriting analysts. As president of the American Handwriting Analysis Foundation (AHAF) I'm proud to say that this conference was the absolute best. In fact, it was so good that even the most critical person in the group--a professional Mr. Crabbypants--had only positive comments. Now I'm back home, wondering once again why it takes twice as many days to catch up as the number of days you were away. Lexie the Very Bad Cat was as happy to see me as I was to see her, though, and only bit me hard enough to draw blood once. The last of my out-of-town company is leaving in the morning and I'm edging back into my routine, catching up on a couple hundred emails and reminding myself to eat more moderately (I gained four pounds).

I'm already thinking ahead to Left Coast Crime in Monterrey next March, and Bouchercon, later in the year. How many of you will be there? Does location influence whether you'll make the effort to attend? One of several important innovations we offered at the AHAF conference was live broadcasting. We used Zoom.us, which is the best videoconferencing system I've seen. Incredibly, Nick Chong, Mr. Zoom himself, came to the conference to help us set up. That's about a 1000 mile round trip on his own dime (really, fifty cents, adjusted for inflation). I suggest checking out Zoom for yourself for free: www.zoom.us

About twelve people around the world who were unable to attend in person watched the proceedings from their homes, and were even able to ask questions of the speakers. This was done at very low cost to the conference (just the internet hookup at the hotel) and the online registrations more than paid for it. So I'm wondering how many of you have attended webinars or other online conferences, and what your experience has been. I would love to see the mystery conference community avail itself of such a service.

Even though it's best to attend in person, financial, health, or other reasons keep many away. A couple of weeks ago, there was an MWA University event in San Diego that I would love to have attended, but it was on the day before I was scheduled to appear at a book club in Solvang, about 300 miles north of San Diego. If live broadcasting had been offered, I could have benefited from the University (which I heard was a wonderful event). 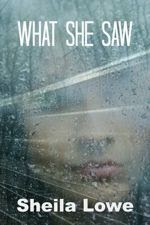 Your thoughts and comments on this subject would be warmly welcomed. Meanwhile, if you're in the L.A. area on Saturday, I'll be signing WHAT SHE SAW at The Best of VC Marketplace, a wonderful little store in the agricultural museum in Santa Paula from 12-3, along with several other authors. I'd love to meet you.