Why I Write Historical Mystery


Why do authors write what they write? Is there some hidden meaning in the genre they choose? Is it purely marketing? Or is it something else?

I guess in my case, it might be all three.

Let’s start with the “something else.” When you are raised in a household of rabid Anglophiles as I was you can’t help but get the Middle Ages under your skin. Books aplenty were on our shelves. There was historical fiction from the likes of Thomas B. Costain, Nora Lofts, Anya Seton, Mary
Stewart, and many others. They sported covers with square-jawed knights in sometimes comical clinches with maidens showing far too much décolletage (this was the sixties, after all. Sex, drugs, rock and roll…and jousting?) But even so, it was a fascinating world of manly men and pointy-sleeve gowned women; chivalrous rules and cunning villains. We also had a fully illustrated child’s version of the Canterbury Tales…with some of the more fabliaux stories excised, of course. The strange Bosch-esque illustrations only served to draw in a curious ten-year-old which led to a life-long devotion to calligraphy and illuminated manuscripts…and Chaucer.

But there were also the non-fiction books about the Middle Ages, the histories, the biographies, the big beautiful tomes with lots of photos of cathedrals and manuscripts and paintings of knights (gotta love the knights!) And if that wasn’t enough, there were dinner table conversations about the British monarchy. Not the present day monarchy, mind you, but of days past. I could name more kings and queens of England than I ever could of American presidents.

So once set on the course of being a novelist, I naturally chose to write about the medieval period. Was there some hidden meaning in it all? A psychological one, perhaps?

I might have gotten my love for things medieval from my parents, but like many American homes in the seventies, divorce reared its ugly head. We all have an ideal of Camelot, but as Arthur learns, the reality is somewhat different. There is a lot to be said about immersing oneself in the fantasy of a knight in shining armor saving the day. I never lost that desire to see honesty and virtue triumph…with all the pageantry and pomp of another place and time. There is something that calls to us to remove ourselves from the present and take up residence in our imagination. A medieval setting is both exotic and dark in the sense that it is a bit dangerous, that behind the shining armor is the face of intrigue and thrones to be lost and won. And in the gloomy recesses of a London street, there is every expectation of mayhem.

And then finally, there is marketing. Let me emphasize that choosing to write an historical—whether a straight historical novel or a mystery—is not the best choice to make you rich. And choosing a subgenre like a medieval mystery is even more of a niche. But I know that there are folks out there, like me, who have coveted their love of history to the point of obsession (there is a freakin’ suit of armor in my living room for God sake) that they, too, would love to immerse themselves in a fictional account of the Middle Ages. And why not make that a mystery? And why not go an extra step and make it a hard-boiled mystery in a medieval setting? That gets all the pistons pumping as far as I’m concerned. That would be me writing something that I couldn’t find out there to read. 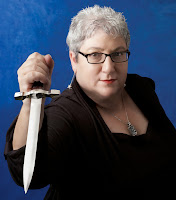 Los Angeles native and award-winning author Jeri Westerson writes the critically acclaimed Crispin Guest Medieval Noir mysteries. Her books have garnered nominations for the Shamus, the Macavity, the Agatha, Romantic Times Reviewer’s Choice, and the Bruce Alexander Historical Mystery Award.
Jeri is president of the southern California chapter of Mystery Writers of America and is vice president of the Los Angeles chapter of Sisters in Crime. When not writing, Jeri dabbles in gourmet cooking, drinks fine wines, eats cheap chocolate, and swoons over anything British.

You  can read more about Jeri’s books on her website, including a book discussion guide on her latest medieval mystery, SHADOW OF THE ALCHEMIST, available October 15, 2013.
Posted by Unknown at 3:00 AM