This is the time of year when fear can be fun. 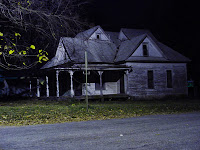 The other day I was with two women on our way to a luncheon to  benefit the CU Depression Center. They were talking about how they loved to decorate for Halloween and design fanciful costumes to wear. When I mentioned that I would like to see A Cabin in the Woods because I hear it turns the whole horror movie genre upside down, they both insisted they didn't like scary movies and then went on to talk about scary movies they had enjoyed. They laughed when they figured out the truth.

Sometimes scary is satisfying, in a weird and unusual and creepy kind of way.

When it's not fun is when there's a forever-reality piece to the scary thing. Whether it's true crime, as we read in posts here earlier from L.J. Sellers and Sheila Lowe, or a life and death situation.

Last week my husband and I were in Aspen and went to a couple of ghost towns. The second one was near the top of Independence Pass (the Continental Divide). The town of Independence, Colorado got its name because gold was discovered there on July 4th. In its heyday there were about fifteen hundred people
living there, then the mine began to produce less and less gold. At the end there was a fraction still trying to eke out a living when the worst winter the area had seen in years left them with dwindling food supplies and no way for horses to pack anything into their remote location. The townspeople ended up taking apart their log homes and making seventy-eight pairs of skis to hike out. I have no idea how many people made it back to Aspen. Real life life and death. Not a good scare.

Another way scary doesn't work real well for me is when I must research something about which I need to know, and yet I don't want to become immersed in the muck of the research.

For example, there are a lot of religions in the world, and some of them are threatening. For The Sacrifice I needed to research Santeria and Santa Muerte to determine which would work best for my plot. I chose Santeria because it routinely involves animal sacrifice, and within the Mexican drug cartels, it has involved human sacrifice. A really good way to up the stakes, wouldn't you say?

I had to research Santeria, get a feel for it, even buy a book about it, to get my story right. I confess to skimming for detail while ignoring the instructional elements. I simply couldn't get comfortable and didn't want this part of my life (my writing part) to shadow the rest of my life because of new information, even if it was true. The scariest thing for me was that websites for cults look just like websites for the local chambers of commerce or colleges. Normal. Routine. Ready for someone who is searching for answers.

I had the opportunity in The Sacrifice to use the words in a prayer/chant. It was short. It would have worked. I couldn't do it.

The Sacrifice will be released next Tuesday, October 22nd, and part of its dedication is to the University of Colorado Depression Center. I hope you pick up a copy and receive a few hours of enjoyment… and a just a little fear.
Posted by Peg Brantley at 1:00 AM