The Wrong Way to Measure a Knife Wound

By Tom Adair
Author of The Scent of Fear 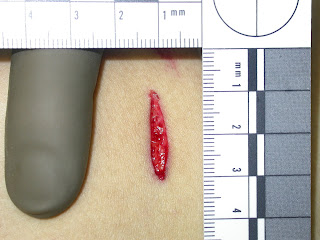 I don't want o get too technical here because, let's face it, the topic is kind of gross. Bu there is a wrong way to measure a knife wound at autopsy. Making this mistake in the real world can have disastrous consequences but in a novel it can be downright exciting! Before we start let's examine why we might measure a knife wound.

The main reason it to get a better understanding of the blade type. Knives (and other sharp instruments) can have many sizes and shapes but they will be either a single edged blade (one side only) or a double sided blade (like a dagger). A wound from a single edged weapon will have one "blunt" end and one "pointed" end. But CSIs also want to know something about the size of the blade. Not just the length but the width.

Here is where is gets tricky.

The body (and skin) is pliable. As such, it can stretch and distort the wound depending on how the weapon is applied. Because of that, wound measurements are generally considered "maximum" measurements. For example, if you find a knife wound that is 4" deep in the abdomen does that mean a 3 1/2" knife can be excluded? The short answer is no (assuming that the abdomen was compressed a half inch during the thrust). Most of us have at least that much play in our gut don't we (if you answer no, I don't like you anymore ;))? Now sure, an 8" knife may only penetrate 4" but usually when someone is stabbing another they are doing it with a lot of force and the blade will go all the way in. But the other characteristic to consider is the width of the blade. That is the distance between the two ends of the wound.

Knife wounds often resemble a "football" (American) or an oval with pointed ends in shape. The reason for this shape in part rests with the elasticity of the skin. There are also properties called the lines of langer but I won't get into that level of detail here. Just realize that skin can lay open when cut. This can effectively shorten the distance between the two ends and thus, the total width. So when measuring the total width of the wound the pathologist will pinch or press the two sides together (like closing the wound) before measuring. Another issue is that since a knife blade cuts, it can expand a wound depending on how the weapon is wielded.

So as a writer, what does this mean for you? Well, knife wounds often go through more than skin. They can go through clothing as well. Here is how you can insert some mystery to your scene. Imagine a pathologist doesn't "pinch" the ends together and measures the wound as being 25mm in width. The body is then cremated. Now let's say your detective (or other character) looks at the clothing and the knife hole is 30mm? What kind of confusion might that cause? Now technically there are a lot of things that can affect the size of a hole in clothing as well. Blood saturation can shrivel a hole to make it appear smaller but you get the point. Mis-measurement is a problem in any area of forensics but when it happens with the murder weapon or wound the results can be disastrous!