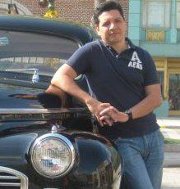 Space: In his book On Writing, Stephen King explains the basic writer’s necessity to have a place one call his or her own. More explicitly he advised about the ability to close a door. Okay, coming from a notorious horror writer, the advice stuck with me big time. Before I read On Writing, I used to write in the TV room, where we have the family computer against a corner. The room was so hot during the summer it could perfectly double as a sauna.

A couple of year ago we moved to another house, one that had a small room out in the back. I seized my opportunity and claimed that room. I managed to get a rusty old desk top; it ran on Windows Millennium Edition. (Yes, the one between ’98 and XP.) Still, the computer was big enough to run Word 2003 and handle more than a few research files. Most importantly, I was able to shut a door that would isolate me enough to delve into my characters, my plotting.

So, did I write the next greatest novel? Hardly. For a while, I barely wrote at all! I write in bursts: 4,000 words in one sit, then nothing for a couple of days. I lack the discipline to write every single day. This shows because I have several WIP in different stages. When I feel the urge to write, it can be anywhere, in the middle of a crowd, regardless of the noise. For example, I’m writing this in my living room, I can hear my wife and kids enjoying a show on TV. The sound is soothing. Then it hit me, old Stephen meant to shut down the mental door.

Company: Besides the muse, of course. I’ve heard of authors who need complete quiet to get in the mood to write. Not me, I need music. Any kind of music would do. I’ve been a Winamp fan since their early versions. I have a few playlists: one with Jazz, one with classical instrumental music, and I have one titled “Some to Stay Awake.” That’s my last resort when tiredness is battling my muse. Among the ever favorites are Frank Sinatra, Michael Bublé, Amy Winehouse, Alejandro Sanz, Julio Iglesias, Juanes, and recently, Adele.

One of the best pieces of advice is not to combine writing with bad habits; that means no drinking by the computer. I know a bottle of wine could spank spark the muse, but at least in my case, there will be plenty of typos to correct the next morning.

Goals: If you can set yourself a daily goal, be it a chapter or word count, it is the best way to achieve constant results. I know, I already said I don’t work well on a daily basis. That doesn’t mean I can’t see its benefits. I’ve also discovered I work better against a deadline. So, my deadlines are not daily. I work in projects. I set a number of scenes that I need to have ready by a certain date. I can goof around for a couple of days, but then the urge to meet that goal settles in and the words begin to flow.

As with any sport or profession, you have to do what it works for you. There are many books, blogs and other information across the wide world web where you can get tips and tricks to help with a work-in-progress. In the end, like Barry Eisler says on his blog, finishing a manuscript is the only thing that is up to the author.

J. H. Bográn, born and raised in Honduras, is the son of a journalist. He ironically prefers to write fiction rather than fact. José’s genre of choice is thrillers, but he likes to throw in a twist of romance into the mix. His works include novels and short stories in both English and Spanish. He’s a member of the International Thriller Writers where he also serves as the Thriller Roundtable Coordinator.

In addition, J.H. has a great short story, The Assassin’s Mistress A random encounter leads to deception, love and murder. While vacationing at a ski resort, professional hitman Robert Prescott meets a strange and beautiful woman. They discover passion and embark into a dangerous game hiding their relationship from her powerful husband. Then a further twist of fate makes Robert’s occupation collide with his new found love.
Posted by L.J. Sellers at 7:30 AM