May day! May day!

We're barely into May, and it's already a busy month for me. First of all, it's the month of my wedding anniversary. C'mon, let's say it all together now: "Awww."

This year is our 20th, which is traditionally celebrated with china, according to the people who keep those kinds of lists. I don't need any china, however, and we can't afford to visit China, so we're going to do the next best thing.


Back when we were mere pups, Dale and I went to Carmel every year for our anniversary. This was because I forgot our anniversary one year. Sue me, we were moving into our new house and my mind was a bit of a jumble. I knew we were married May 16th, I just thought it was the May that comes after June.


Anyway, we spent a few years getting pre-occupied with life, so we thought we'd try to get back to the beautiful Central Coast. We scamper off next week to enjoy several days of sightseeing, wine tasting, and relaxing. But in the meantime…


I finally got all my ducks in a row and FREEZER BURN is now re-released, in paperback and e-book. Re-releasing it was actually the easy part. My wonderful designer did a kick-ass cover, as usual, I edited it again (story is the same, I just corrected a couple of things), and I know how to format for Createspace and Kindle.


I'm using the Kindle Select Program again. I feel horrible twinges of guilt that my Nook buddies can't get a copy, but I truly did less than 10% of my sales last year on all the non-Kindle e-readers combined. Plus the fact that Barnes & Noble tended to be the last ones to pay me kind of led me to Amazon's mighty door.


The hard part was re-doing the advertising. After all, FREEZER BURN has a new cover. 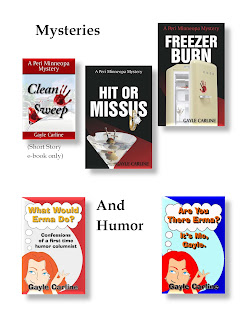 And the book trailer…


Then there was the banner that I put up on my booth at my local fairs. I do a fairly nice business at my city (Placentia) events, since my mysteries are set in the city and my humor books are collected from columns I write every Thursday for the local newspaper. 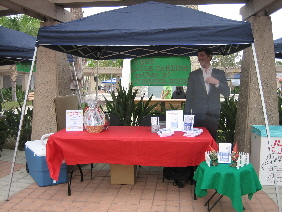 And I have a lot of bookmarks with the old cover - I probably won't replace them until I get low on supplies.


I'm truly thrilled with the new edition of my book, however, and tomorrow, I get to join a book club and talk about HIT OR MISSUS.


Life may be busy, but it sure is good!


OH OH OH, P.S. I forgot to mention, in honor of my 20th anniversary (to a great guy, btw) ALL my e-books will be available for free on May 16th. Mark your calendars. You heard it here first. You can find them all on my Amazon page.
Posted by Gayle Carline at 12:00 AM