What's new? Not much. Only everything.


It's been almost two weeks since I went to Left Coast Crime, which is, like, a year in a dog's life, so I should be talking about the future instead of the past. So I'll do that, except that I first have to tell you all what a fun convention it was and how much I enjoyed seeing LJ again and meeting Marlyn for the first time.

This was my second convention - in 2009 I went to Bouchercon. Normally I go to writer's conferences, which are a lot different than conventions. Conferences are about getting fired up about writing and doing the work. Conventions are more about chilling and meeting people. After LCC, I finally think I know how to relax and be at a convention.

On to the future: I came back from the convention to shifting priorities. Before I left, I was writing three books, in various stages. I'm smack-dab in the middle of my third Peri mystery. I've started development of a new mystery with new characters. And I'm about 10,000 words into my horse's memoir (see his blog for an explanation). I was juggling these balls without problem.

Until I got my rights back to my first mystery, FREEZER BURN. Suddenly, if I wanted to keep it available, I needed to get a new cover, find the last version of the novel and put all the parts together myself.

The good news is I'm not derailed, only detained (and a little deranged). I've got the cover, I found the file* and it should be up and rolling on Kindle and CreateSpace soon. Here's the new cover: 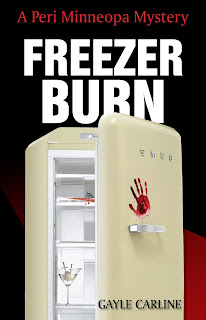 *After I found the file, I couldn't resist editing a few things. So it's the same book, only a little better!
Posted by Gayle Carline at 12:00 AM