How to Spot a Stolen Car 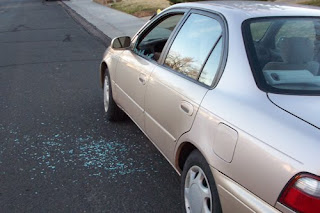 Criminals generally steal cars for one of two reasons; chopping or driving. Cars destined for the chop shop don't stay on the road long enough to matter so I'll focus on the latter. In this categories cars can be stolen to drive for short distances (i.e. escape a crime scene by car jacking) or long distances. Believe it or not some criminals steal cars simply because they don't want to buy one and maintain it. If they have the keys to the vehicle the car is hard to spot but when they don't there are some tell-tale signs. These signs correspond to the entry, operation, and identification of the vehicle. 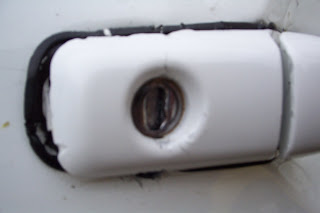 Car thieves vary in sophistication and this is apparent in their method of entry (assuming the car is properly secured). Some just break out a window, but that is hard to hide. If they break out a window they have to cover it with plastic or it will stand out to others more than if it is left broken. If any of the windows are left slightly open the thief may just force it down far enough to get their arm in or a coat hanger. Another popular method is slipping the lock with a coat hanger or tool called a "slim Jim". In both cases there may be holes or damage to the rubber weather seals around the window or door frame. Other damage may be seen to the lock mechanism (where you insert the key). They may use a screwdriver or skeleton key in an attempt to open the door. This damage can be seen by close inspection of the lock although it is tougher to spot than a broken window. 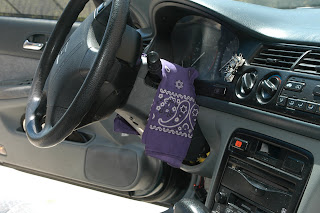 Assuming the crook doesn't have a key they usually have to force the ignition. In these cases it is common to remove the steering column (plastic housing) in whole or in pieces (notice how I avoid telling you how to steal a car :)). Obviously this is hard to hide. You see, crooks that want to use the car for weeks or months don't want it to be obvious that the steering column is damaged so a passerby doesn't call the cops. One way to hide this is to wrap the area with a bandana or t-shirt (see photo). Most people don't "wrap" their steering column so this is a tell-tale sign of a forced ignition. 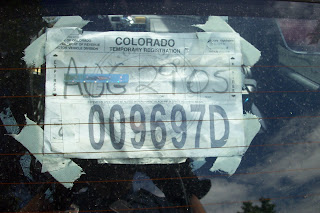 Stolen cars can be identified by either their license plates or VIN (vehicle identification number) and in some cases distinctive damage, mismatched paint, or bumper stickers. Changing license plates is pretty easy and if they drive within the law and don't act crazy it's unlikely a cop will run the plates. Some will change them. However, one giveaway is when the condition of the plates is inconsistent with the rest of the vehicle. For example, if the new plates are dirty and the vehicle is "clean" then one has to wonder how one could clean a car and miss the plates right? Another sign is plates missing a number of screws to hold it on or screws that aren't tightened all the way. So a screw sticking out a 1/4" is unusual and stands out to the CSI. Most of the time though they will forge a "Temp Tag" like the one in the photo. It's really not that hard and since they are taped onto the inside window they can be harder to spot unless you really examine them closely. Another source of identification is the VIN. The VIN placard is located on the dashboard on the driver's side near the front. Most criminals will simply put some papers or a hat on the dash to cover the plate making it impossible to read from the outside. When you combine that with mismatched plates and a wrapped steering column and you might as well hang a neon sign saying "Stolen Car".

Spotting a stolen car is a handy trait for your detective or CSI character to possess and the above are all good indicators.
Posted by Tom Adair at 7:00 AM