It’s Tom’s day to post, but he’s been shy to talk about his first novel, so I prompted him with a bunch of questions. If you haven’t heard, Tom released The Scent of Fear recently, and based on his background as an exceptional forensic scientist, it’s no surprise his novel is pretty special too. Here’s more in Tom’s own words:

LJ: Did a specific event or crime inspire this story? 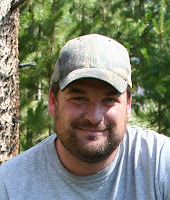 Tom: They say that you should write what you know. While the story is fictional, many of the events are inspired by actual cases I’ve worked. I’ve changed many of the details but a number of colleagues have commented on the similarities. I think it adds tremendous realism to the story by keeping it within the property line of my experience. In some ways writing this novel was therapeutic too. The crimes I saw in my career were not the types of things you can talk about at the dinner table. My family knew what I did but they never had a clear picture. It was my way of protecting them from the evils I saw. In The Scent of Fear I had the opportunity to shed some baggage I had been holding on to. It gave me permission to unburden myself.

LJ: Who is your protagonist modeled after? Because you’ve had the same career as your protag, is it difficult to keep her actions/thoughts distinctly separate from yours?
Tom: I don’t want them to be separate. Put simply, she’s the girl next door that can kick in the door. Sarah Richards could be compared to so many young professional self confident women in law enforcement. I love the depth her character offers me as a writer. Sarah has a wonderful mix of strength and vulnerability I couldn’t create with a male protagonist. She is young and impulsive and that makes for some hairy situations she finds herself in, but that can be said of so many young professionals. Sarah was created as a franchise character and I can’t wait to see how she develops with age and experience (just as I did).

LJ: Does the novel have a theme or message you want the reader to come away with?
Tom: Be fearless! So many of us let fear run our lives and it usually makes us miserable. Fear also keeps us from reaching our full potential. Sarah has fears but she must rely on her inner strength and morality to persevere (physically and spiritually). That is her story. In the end she only has herself to rely upon (metaphorically speaking; that was not a spoiler).

LJ: What else do you want readers to know about this story?
Tom: On a serious level I wanted to give readers a peek behind the curtain of crime. Evil does exist in our world. I’ve met it, spoken to it, even been threatened by it. We tell our children that monsters exist only in bedtime stories but they don’t. Monsters are out there; among us. Be prepared to meet them.

LJ: At what point in your law enforcement career did you realize you wanted to write instead? What was it like to make the transition?
Tom: The novel (trilogy) has been rolling around in my head for over a decade but I always figured I’d just write it when I retired. I never thought that day would come so quickly. I guess, like a lot of folks in that business, I hit a saturation point. I never saw it coming. Apparently the dark events in our lives can ferment until our soul can bear them no longer. I just wanted out. The problem was that my particular skill set is not very applicable in the civilian world. I had been a technical writer, not a fiction writer but it seemed like the right fit. Looking back I think it was fate.

LJ: Are you able to use specific incidents from your career in your fiction?
Tom: I’ve heard the term faction thrown around and I like it. A blend of fiction and reality. I’m very careful not to betray and confidences or divulge anything that might complicate any open investigations but that still leaves me a broad range of experiences to tap into.


LJ: What’s next for you? Are you working on another novel?
Tom: The Scent of Fear is the first in a trilogy and I am busy working on the second portion of the story which delves deeper into the motives of the serial sniper. I don’t want to give away too much but just as in The Scent of Fear there is a parallel story line of murder. I’ve always liked stories in which the protagonist must juggle different problems. I have to be careful not to overwhelm the reader with minutiae but real CSIs have to deal with many professional and personal distractions so why should our characters be much different?

FYI, Amazon Prime members can now check out The Scent of Fear free!