As an undergrad I studied cultural anthropology and it made me a better criminalist. That education forced me to recognize that people engage in a myriad of cultural practices and beliefs. Some of these may seem quite odd, offend our morality, or be classified as criminal acts under our laws. Over the years I've spoken to criminalists from all over the world, and those conversations remind me that our perceptions and values are influenced by these practices. As people, we sometimes have a hard time understanding cultural practices outside our own, even among people of the same "society". These differences can sometimes be problematic for detectives and crime scene investigators because the activity does not conform to what we may consider "normal". Take the United States for example. We have a very diverse culture, even among people of the same geographic area. A prime example of this is food preparation.

A few months ago I saw this BLOG posting about a Polish ritual at Christmas time that involves the home slaughter of carp. It was the photograph of the bloody bathtub that really caught my eye and I immediately began wondering how I would react to seeing a tub full of blood at a crime scene. Most people don't have blood spattered all over their bathrooms. Then I remembered a trip I took to a small town in Iowa. A sign in the motel bathroom asked hunters not to clean their game birds in the bathtub. It's all a matter of perspective you see.

Killing an animal for food might seem very strange (even cruel) to people living in a city with a grocery store down the street. On the other hand, paying "good money" for a steak seems bizarre to a cattle rancher. I've been to crime scenes with goat heads in the refrigerator and live chickens scurrying around the house. At another scene, a cow's tongue was found hanging from a tree. The tongue was filled with tiny scraps of paper bearing the names of people. Out of a cultural context one might think they have stumbled into the home of a serial killer. More often than not though you've just expanded your cultural understanding of the world. 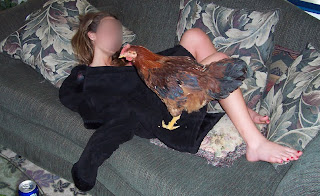 The reason I bring this up is that these cultural misunderstandings can lead to fireworks in life, and in your novel. As writers we tend to write what we know. What we "know" is often bound by our cultural practices. After all, it's hard to imagine some of the various rituals and ceremonies that exist outside our comfort zone.

This is especially true of food. People are much quicker to change their manner of dress or speech over diet. But just like real life detectives, writers should be mindful of the limitations of our accepted reality. We should embrace cultural differences because they can enrich a scene. As a reader I love being surprised. Nothing kills my desire to turn the page faster than one predictable scene after another. Predictable stories never challenge your views, never force you to look at the world in a new light. Cultural differences can momentarily scramble your brains, put you off balance. That makes for a memorable scene.

So as you are developing your characters ask yourself how you might use cultural differences to the delight of your readers. The more culturally diverse your scene setting is, the more likely your characters will encounter foreign practices. The same effect can happen in reverse too. If, for example, your character is placed into a foreign "homogenous" setting (think Crocodile Dundee). An easy place to start is the varied methods of meal preparation. Read up on various cultures and see if something catches your eye. If nothing else, you may find a great recipe!
Posted by Tom Adair at 8:00 AM