The Citizen Police Academy of the Santa Monica Police Department 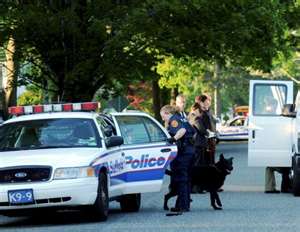 With no warning, an ordinary-looking man dropped the “baby” he was carrying in his arms and rushed at me, brandishing a knife. I shot and killed him with the gun I’d been given.


Fortunately, it was only a simulation of a dark alley, and a training exercise that was part of a Citizens’ Academy class. The purpose of the twelve-week course was to demonstrate to ordinary citizens the complexity of police work and explain why the officers you meet react to you as they do. My debut police mystery, No Dice, is set in Santa Monica and I was eager to get the details right.
Our class of twenty “lay people” was drawn into every facet of police work taught by the people who do the job—from forensics to traffic investigation, the firing range, the jail, the Harbor Patrol—as well as a demonstration of the Israeli self-defense techniques that officers learn.


We had an opportunity to make a simulated traffic stop. I almost sank to my knees when I put on the Sam Browne belt with the mock gun, the flashlight, and the twenty pounds of gear that goes around the waist of every officer.
It may come as a surprise to some that traffic stops are the most dangerous aspect of police work. My task was to get the driver’s documents and return to the cruiser. It was dark as I nervously approached the car, having just seen the driver leap out of the car and “shoot” the classmate who volunteered just before my turn.
This time the officers/actors played it a little drunk. They wanted to argue with me. I found myself becoming hard as nails, Joe Friday tough. Anything could and did happen during these simulations, as it does on the street. I managed to get the documents, but the encounter left me shaken and surprised at how mean and nasty I sounded.
In a nighttime demonstration by The Special Entry Team, two officers rappelled down the side of a cement tower training facility to approach a parked car in which I volunteered to be “captured.”


I knew it was coming. I still wasn’t prepared to have my ears blown off and flash bangs explode next to me as stealthy black Ninjas suddenly appeared at the door of the car, pointing automatic weapons at me. It happened in a second!
Each week the class engaged with police executives, staff members and especially with patrol officers, the people who know the mean streets of Santa Monica that most of us rarely see. Those mean streets are a matter of perspective.
During my Ride-Along, the officer and I were patrolling the beach parking lots around three a.m. when he left the cruiser to find a young girl lying across the front seat of a new car. He told me at first he thought she was dead. Her story was that she felt safer here sleeping in her car at the beach than in her own home in a downtown Los Angeles neighborhood.
Most of us are unlikely to see a table strewn with packets of crack cocaine, heroin, methamphetamine, and a variety of drug paraphernalia such as the drug detail brought in. If our class was any indication, the sergeant pursues drug offenders with humor and great enthusiasm. They probably don’t find him nearly as amusing as we did.
We saw that same zeal in more than thirty officers and personnel who talked about their work. They really like catching bad guys.
Police work is hard. It wears people out. Events don’t roll out nearly as simply as they appear in the newspapers. Life-changing decisions are made in a second, which juries and lawyers can wrangle over for years afterward. There can be a lot of valid explanations for events, and I’m not so quick to judge anymore.
Check and see whether something like the Citizen Academy program is available where you live. For crime writers, this is a valuable, eye-opening experience and an opportunity to grab. Most people like to talk about what they do, and within real boundaries, so do law-enforcement people.

Note from Jodie: A quick Google search revealed similar Citizen Police Academy courses in many cities across the U.S. and Canada.

Mar Preston, author of crime fiction No Dice, is today’s guest blogger, filling in for Jodie Renner, who recently edited Preston’s second police suspense-mystery, Rip-Off, also set in Santa Monica, California. You can email Mar at marpreston@frazmtn.com, and find out more about her two Detective Dave Mason police mysteries, No Dice, and soon, Rip-Off, at www.marpreston.com.