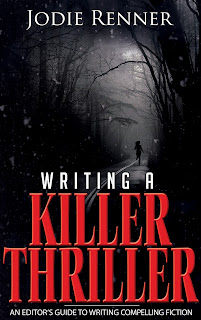 Thanks to the legacy of Agatha Christie, Sir Arthur Conan Doyle (Sherlock Holmes mysteries), the Nancy Drew and Hardy Boys books, Murder She Wrote, Colombo, and many other old favorites on-screen and in print, most of us are familiar with the mystery genre.

But what’s a thriller?

How are suspense-thrillers different from mysteries?

Both are fiction stories involving criminal activity, catching the bad guy(s), and at least one murder.

The main difference seems to be in the delivery—how they are told. Mysteries are usually more cerebral, like solving a puzzle, whereas thrillers appeal more to the emotions and a quest for excitement and dangerous situations. A mystery, especially a “cozy” one, can unfold in a leisurely fashion, but thrillers need to be much more fast-paced and suspenseful.

“In a mystery, the hero has a mission to find a killer.

In a thriller, the hero has a mission to foil evil.”

According to International Thriller Writers (www.thrillerwriters.org), a thriller is characterized by “the sudden rush of emotions, the excitement, sense of suspense, apprehension, and exhilaration that drive the narrative, sometimes subtly with peaks and lulls, sometimes at a constant, breakneck pace. Thriller is a genre in which tough, resourceful, but essentially ordinary heroes are pitted against villains determined to destroy them, their country, or the stability of the free world. Part of the allure of thrillers comes from not only what their stories are about, but also how they are told. High stakes, nonstop action plot twists that both surprise and excite, settings that are both vibrant and exotic, and an intense pace that never lets up until the adrenaline-packed climax.” (Source: James N. Frey, How to Write a Damn Good Thriller)

David Morrell, best known for his debut 1972 novel First Blood, which was the basis for the successful Rambo films, and author of 28 thrillers, most recently, Shimmer and The Naked Edge, posed the question several years ago, “What is a Thriller?” He decided to explain the difference between thrillers and mysteries because “some readers evidently have a porous view of who-done-its, crime stories, action stories, suspense stories, thrillers, etc, and group them all together as mysteries."

So, asks Morrell, “…what’s the difference between mysteries and thrillers? According to him, “One crucial distinction is that traditional mysteries appeal primarily to the mind and emphasize the logical solution to a puzzle. In contrast, thrillers strive for heightened emotions and emphasize the sensations of what might be called an obstacle race and a scavenger hunt. It’s not that thrillers don’t have ideas. […] But in broad terms, the contrast is between emotion and logic, between an urgent pace and a calm one. True, the two genres can merge if the scavenger hunt of a thriller involves solving a puzzle. But in a thriller, the goal of solving the puzzle is to excite the reader as much as to satisfy curiosity.” (David Morrell, www.crimespreemag.com)

Which do you prefer, mysteries or thrillers?

It probably depends on your mood, but personally, I much prefer the pure escapism and “pulse-pounding suspense” of thrillers.

Who are some of your favorite contemporary mystery writers?

How about your most-read thriller and romantic suspense writers?

For suspense-mysteries, I love LJ Sellers' page-turning Detective Jackson series. And maybe I should put Harlan Coben’s Myron Bolitar stories and Robert Crais’ Joe Pike and Elvis Cole stories into the hybrid category of suspense-mysteries, too. What do you think?  Any others you like that have elements of both?

What about your favorite thriller characters?

Do you have any other favorite crime fiction characters to recommend?

Jodie Renner, a freelance fiction editor specializing in thrillers and other fast-paced fiction, has published two books to date in her series, An Editor’s Guide to Writing Compelling Fiction: WRITING A KILLER THRILLER and STYLE THAT SIZZLES & PACING FOR POWER (Silver Medalist in the FAPA Book Awards, 2013). Both titles are available in e-book and paperback.
For more info, please visit Jodie’s author website or editor website, or find her on Facebook or Twitter.
Posted by Jodie Renner at 6:00 AM