An Author By Any Other Name…?

When is a writer truly the author of the book his or her name adorns?

I’m not sure where and when it started. Maybe with the Stratemeyer Syndicate back in the ’20s, ’30s and ’40s. Those of you who grew up on The Hardy Boys or Nancy Drew mysteries, Tom Swift, Jr., science fiction adventures or The Bobbsey Twins know about it. They were books written by multiple authors under a single pen name. (I actually preferred the Judy Bolton books to Nancy Drew, and all of those except #39 were written by Margaret Sutton, but I digress.

The point is, these series were written in the same voice under a single name to preserve and market a brand, and it was a highly successful way of packaging books for kids and young adults.

Though ghostwriters have been around as long as books, I can’t think of an example of that kind of syndication in adult books until authors started building their own brands. Sure, many an author—quite famous ones at that—adopted a pen name to dash off a dime novel or three back in the late 18th Century, and pulp magazines and novels in the 20th. You probably know that Asimov, Bradbury, Elmore Leonard and John D. Macdonald all wrote pulp fiction, but did you know the list includes names like F. Scott Fitzgerald, Agatha Christie, Tennessee Williams, Dashiell Hammett and Cornell Woolrich?

But that still doesn’t get at what I’m thinking of. What I’m talking about are authors who write for other authors to grow their brand. The earliest example I can come up with is Robert Ludlum. Ludlum, the

author of the very popular Bourne series, died, of course, leaving fans in the lurch. Since his death, several authors, including Gayle Lynds and Jamie Freveletti, have penned terrific Ludlum novels, keeping the franchise alive.

A prime example of a modern living author farming out projects to other writers is James Patterson. Patterson wrote a book with Peter Kim in 1991 and another in 1994, then his first with Peter deJonge in 1996. In 2002, he hooked up with Andrew Gross for the second Women’s Murder Club. Since then, Patterson has published a slew of books in different series in conjunction with several other writers. Tom Clancy also developed several series co-written with other authors before his death.

After essentially retiring in 1999, Clive Cussler has kept not only his Dirk Pitt series, first published in 1973, alive and well, but has launched several other series with the help of other authors, including his son Dirk. Also keeping it in the family, Felix Francis collaborated with his father Dick on the last four books before Dick died, then took over the franchise after Dick’s death.

The latest trend, though, is collaborative efforts, where two authors of nearly equal recognition combine talents to broaden their often different audiences. Examples include James Rollins and Rebecca

In almost all cases, the use of other authors besides the one whose name gets top billing is brilliant marketing, a way to expand an audience, introduce a new series, and grow a franchise (or continue one after an author’s death). But is it really kosher? Is a reader who pays $5.99 or $32.99 or even $0.99 for an author’s new book somehow gypped when the book is written by someone else? Do partnerships between authors add up to less than the sum of their parts because they’re neither one author’s work nor the other’s? And when the marketing juggernauts of co-authored books compete for the reader’s entertainment dollar, are solo, “midlist” authors squeezed out of the picture? Should the rest of us be looking for writing partnerships?

What do you want, readers? Do you like collaborations? What do you think of ghostwritten books (a la Patterson’s series)? Will the trend grow? If so, what value do you find in reading solo authors? 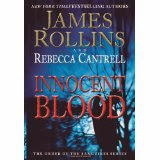 Michael W. Sherer is the author of Night Tide, the second novel in the Blake Sanders thriller series. The first in the Seattle-based series, Night Blind, was nominated for an ITW Thriller Award in 2013. His other books include the award-winning Emerson Ward mystery series, the stand-alone suspense novel, Island Life, and the Tess Barrett YA thriller series. He and his family now reside in the Seattle area. Please visit him at www.michaelwsherer.com or you can follow him on Facebook at www.facebook.com/thrillerauthor and on Twitter @MysteryNovelist. Some day he plans to write a book with Joe Konrath, or maybe Lee Goldberg, or perhaps Robert Gregory Browne. Better yet, Allison Brennan. That is, if any of them ever ask him to.
Posted by Michael W. Sherer at 7:43 AM