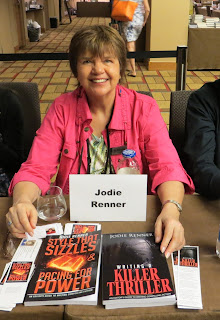 Just got home from Thrillerfest in NYC and realized it's my turn to post a blog here! Hope I can stay awake long enough to say a few words about THE biggest (only?) thriller writers' conference of the year.

This was my fourth Craftfest/Thrillerfest in a row - and maybe my last, as The Big Apple is expensive - especially in July! But I had such a great time that I may just scrimp and save to go back again next year...

The conference is four days long, with all day Wed. and Thurs. a.m. devoted to Craftfest workshops and a luncheon. Thurs. pm is Agentfest (which I didn't attend), followed by two days of Thrillerfest panels, interviews, author signings, book-buying, cocktail parties, and general schmoozing and catching up with or getting to know other authors and aspiring authors.

I highly recommend Craftfest, the first day and a half, for aspiring authors and anyone wanting to hone their craft. The workshops are always excellent, and are presented by accomplished authors who are also great teachers. And most of them are pretty entertaining, too!

Thrillerfest is mostly panels and interviews, and of course a lot of socializing. This year I was on a panel for the first time, called "How to Become a Masterful Editor - of Your Own Work." 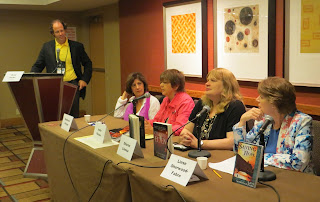 Brad Parks was highly entertaining as our panel master. I had prepared handouts on three self-editing-related topics, all of which were scarfed up immediately. I had no idea we'd get a packed room for our panel! Click HERE to read the handouts on steps for revising and self-editing, how to save on editing costs, and cutting word count. 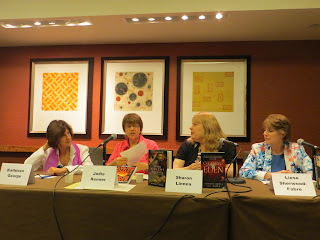 And a great spin-off was that a lot of people came up to me at the end and asked for my card and expressed an interest in my two craft of writing books, Style That Sizzles & Pacing for Power, and Writing a Killer Thriller. I ended up selling a lot of books at the conference - way more than I thought I would.

The best part of the four-day conference was connecting and networking with author friends from Facebook -- and also meeting a bunch of great new people.

Stimulating and fun, and I came away with so many ideas, from writing and editing to publishing to marketing and promoting!

If you attended Craftfest and/or Thrillerfest this year, what were some of the highlights for you?

Conferences can be expensive, but they're so worth it in many ways. And there's always the option of trying to find one close to home...

Do you enjoy writers' conferences or conventions? Which are your favorites, and why? How about ones you'd like to attend but haven't yet?

And by the way, as with many big conferences, all the workshops, panels, and interviews were recorded, and you can buy the CDs at www.Thrillerfest.com.

Jodie Renner has published two books to date in her series, An Editor’s Guide to Writing Compelling Fiction: Writing a Killer Thriller and Fire up Your Fiction (Style That Sizzles & Pacing for Power), which has won two book awards so far. Look for the third book in the series, out soon. For more info, please visit Jodie’s author website or editor website, her other blogs, The Kill Zone and Resources for Writers, or find her on Facebook, Twitter, and Google+. And sign up for her newsletter.
Posted by Jodie Renner at 6:33 PM